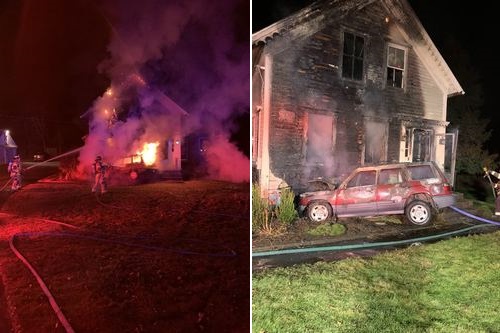 Above: A Southborough family lost its home on Saturday morning as a result of a terrible accident. Community members are contributing to a fundraiser to help them cope. (images from Southborough Fire Department website.)

Early Saturday morning, a car collided into a Southborough home. By the time firefighters arrived it was engulfed in flames, with the house also ablaze.

Residents of 89 Framingham Road fortunately escaped without injury. However unidentified driver and passenger were last reported as having been transported to the hospital with serious injuries.

By yesterday afternoon, Lisa Braccio (Chair of the Board of Selectmen) had already launched a GoFundMe page to help the family displaced by the fire:

Many have asked how to help the Cocomazzi Family after the devastating accident and fire that happened this morning at their home. The Family is doing well, but certainly overwhelmed with the process of getting their lives back in order. The purpose of this fundraiser is to allow our Community that wants to help their friend and neighbor an avenue in which to do so especially during the Holiday Season.

Please reach out to Lisa Braccio or Chelsea Malinowski with any questions.

Just before 1:30 this morning, the fire and police departments responded to a serious motor vehicle crash into a house at 89 Framingham Road. Upon arrival crews found a vehicle engulfed in flames with the fire extending into the first and second floors of the home. The residents escaped without injury. The driver and passenger suffered serious injuries and were transported by Patriot and Westborough ambulances to the hospital. A first alarm was transmitted and with the aid of Marlborough an Westborough Fire, was brought under control within a half hour. Ashland Fire provided coverage for the town. The residents are displaced due to fire, smoke, and structural damage to the house.

It’s the second car to crash into a Southborough home in just over a week. On Friday, December 11th, a car crashed into a home at 6 Main Street. That incident didn’t result in a fire or serious injuries, but was reported to have potentially impacted the building’s structural integrity. The SFD shared:

This evening crews responded to a reported vehicle vs building at 6 Main St. A pickup truck left the road, striking an occupied 2-family house at a high rate of speed resulting in significant vehicle damage. Due to simultaneous emergency calls Marlborough-Patriot ambulance transported the driver who suffered minor injuries. No occupants were injured. The building sustained moderate foundation & structural damage. Due to life safety concerns the building was deemed uninhabitable until further inspections can be conducted. The incident required the joint efforts of the Southborough Police Department, Westborough Police, Hopkinton Police, Southborough Building Commissioner & Wire Inspector, National Grid and Ted’s of Fayville towing.

The Southborough Police post on the same incident further shared:

Southborough FD did a great job responding to and putting out the fire at a chaotic scene. Judging by the photo the car almost crashed into the gas meter which can be seen to the left of the car. As a resident I am grateful for our first responders to be there at a moments notice. You never know when these incidents can happen.

Just drove by the Andrea restaurant. Wondering why this eyesore, decrepit, and disintegrating ANDREA restaurant, hasn’t been razed. If the town feels strongly in terms of improving downtown, why is this awful looking edifice still standing.

I had heard a while back that somebody was interested in purchasing the property but the current owner wanted way too much money for it. He thinks he has a gold mine and not a dilapitated old building. It is too bad because if it was sold and rehabbed it would be much nicer.

I’m not sure why these comments are under this unrelated post. So for anyone who reads the above comment – to avoid misunderstanding – “Resident” is referring to the old Andrea on Rte 9 and not the home in this story!

Sorry I made this worse. Maybe we need another thread on questions and concerns. There seem to be a lot of those.

Purely coincidentally, I had already been working on a post related to commercial property vacancy issues on Route 9.

Hey, good idea, maybe we could walk and chew gum at the same time!

Is there a public policy change that is needed for that commercial zone? If so, it would likely make the property more valuable. I’m ok with that, especially if it helps make Southborough a better place.

I heard a rumor many years ago that whoever was trying to redevelop a restaurant on the site ran out of money due to big septic problems. Google Maps aerial photos show that virtually the entire property is paved or built on, which would be an issue, since the two small strips of unpaved land are next to a stream on the north and over an easement on the south (next to Rte. 9).