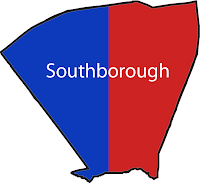 Is Southborough a blue town or a red town?

If voter registration numbers are any indication, we’re a blue town … maybe. As of January 2008, the most recent data I could find, 24% of Southborough voters were registered as Democrats and 20% as Republicans. Independents made up a whopping 56%.

With such a high percentage of independents, it’s hard to judge our political leanings based on voter registration. So how about campaign contributions?

From January 2007 to June 2008, Southborough donated $33,241 to the Obama campaign versus $19,625 to McCain. Another vote for blue? Obama is outpacing McCain in campaign fundraising overall, so it’s hard to say.

Looks like we may not know the real answer until the dust settles next week.