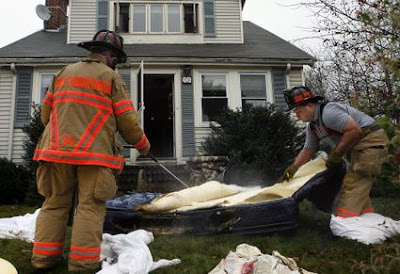 Southborough firefighters work on a mattress after it caught fire in a bedroom at 10 Winter St. in Southborough Friday afternoon. (Photo from Metrowest Daily News)

The busy week for the Fire Department continued on Friday. In addition to the pedestrian accident I posted about previously, Southborough fire crews responded to two other significant incidents on Friday.

House fire on Winter St.
An unattended candle on a night stand ignited a fire at 10 Winter St. on Friday afternoon. The fire spread to the mattress, box spring, and bedding. It was quickly extinguished and no injuries were reported.

The homeowner extinguished visible flames before fire crews arrived, but the fire was still burning in the mattress. Firefighters brought in a hose to further extinguish the fire, then removed the bedding from the house.

The fire was in the master bedroom on the second floor of the home, so Southborough requested an aerial truck from Framingham since Southborough’s ladder truck is out of commission. Crews from Ashland were also called in.

More details and photos on the Fire Department website.

Carbon monoxide leak at Fay
The Dining Hall building at Fay was evacuated on Friday morning after a mechanical failure in the kitchen exhaust duct system allowed carbon dioxide to build up in the kitchen. Two Fay School employees were transported to Marlborough Hospital for evaluation and then released. No children were exposed.

It’s the second time an area school has been evacuated due to carbon monoxide in recent months. In October the Zeh school in Northborough was evacuated after a boiler malfunctioned.

You need to have dectectors. Crabon monoxide is colorless and odorless.It will kill. Childern and elderly are more affected. Thank goodness for plug in dectectors.