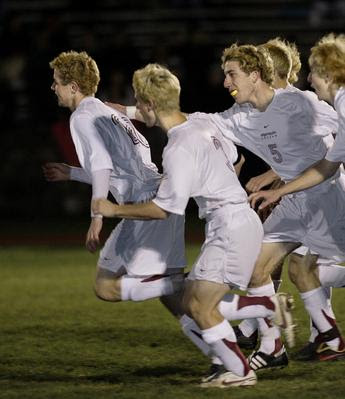 Algonquin’s Jacob Wilson (20) leads the celebration after he scored the Tomahawks’ first goal in their 3-1 win over Marlborough. (Photo from Metrowest Daily News)

The Algonquin boys soccer team beat Marlborough 3-1 in the Division 1 Central semifinal match. That means, like the girls, they’re headed to the championship round.

The details are still to-be-announced, but Algonquin will face second-seeded St. John’s.

Read more about Algonquin’s domination of Marlborough in the Metrowest Daily News and in this article by the Worcester Telegram & Gazette.

Update: The details for the championship round have been announced. Algonquin faces St. John’s at 5:00 pm on Saturday at Auburn High.