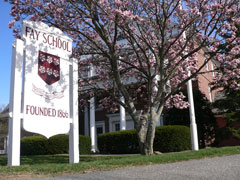 At their meeting on Tuesday night, Selectman Bill Boland announced that Fay School has decided to match St. Mark’s $100,000 donation toward the purchase of a new ladder truck for the town. Great news, right?

Fay will donate $10,000 over the next ten years, all earmarked for the ladder truck. The problem is, that’s all they plan to give the town. Their normal annual PILOT payment of $5,000 — already on the low side compared to other nonprofits in town — will go away in lieu of the ladder truck donation.

Compare that to St. Mark’s which will pay $10,000 a year for the ladder truck in addition to their annual $20,000 PILOT contribution.

Better yet, compare that to the New England School for Children. NECC has offered up $120,000 over the next ten years for the ladder truck on top of their $77,000 yearly PILOT contribution, making them the poster child for good town-and-gown relations.

Chairman Sal Giorlandino said he was “disappointed” that Fay was not willing to give more. “This board is making it clear that Fay hasn’t done the right thing.”

Boland said schools have cited the poor economy as a reason why they can’t give more. Financial aid requests are up, while enrollment is down and endowments have taken a hit.

But residents at Tuesday’s meeting said the construction projects Fay has recently undertaken makes that argument hard to swallow.

Boland said discussions with Fay will continue. “We do appreciate anything we’re given by any institution that doesn’t pay taxes,” he said. “But maybe we can get them to do a little more.”

Selectmen also approached Harvard which owns the Primate Center and the Book Depository off Parmenter Road, about making a contribution to the ladder fund, but have not yet received a response. Harvard typically makes an $18,000 PILOT contribution annually.

Fay School, along with St. Mark’s School have had construction going on for the past couple of years. Increased faculty housing, new dormitories, and not any increase in their PILOT payments. Fay has the unmitigated gall to cry poormouth! My property taxes, as well as everyone else’s went up to pay for services we don’t all use. These institutions on the other hand own hundreds of millions of dollars in non-taxed properties, use the police and fire departments on a regular basis, AND send numerous faculty children to our public schools. The 1860’s are over. Time to pony up, and be good neighbors like other non-profits in town.

How much money does the fire dept. have in the ladder truck fund? And why isn’t Harvard shareing the wealth?

You forgot to mention The New England Center’s PILOT contribution which was around $79,000 (give and take a few thousand – close to what it would owe in taxes to the town) and NECC too pledged a large some of money ($100,000) to the ladder truck.

A non profit school that serves Autistics can pay up but Fay can’t (or should I say won’t). Fay’s endowment took a hit, oh please – look around their campus.

Where’s the reasoning there?

Sorry to say that snobbery and greed has prevailed.

Even if you ignored Fay’s sprawling campus and recent improvements, and considered only the “off-campus” housing that they’ve bought up over the years, how many tens of thousands of dollars would that be every year in tax revenue? The rest of us pay more to support that.

I’m not suggesting that they should be billed for those taxes, but certainly Fay should put that into perspective in determining a fair annual PILOT contribution to Southborough.

Cam….the article states that the town hasn’t received a response from Harvard regarding the ladder truck. And the article DOES mention that NESC ( not NECC anymore) has pledged, and pays out quite a bit to PILOT. What the real problem is that lots of people just don’t see that Fay School has built several new buildings, and they are building more on Middle Road, yet they pay a pittance to the town. It just ain’t fair! BTW – what numerous folks never picked up on was that on July 17th at 2117 (9:17 PM), the fire department responded to a fire in the building on Village Path….which just happens to be one of the new Fay School buildings! It’s a good thing the fire wasn’t rolling out the windows because the closest ladder trucks were 5 – 10 minutes away. A fire doubles in size every minute, which is why seconds count. The new ladder truck that the department would like to purchase has a ladder and a pump…two trucks in one at the scene ASAP.

Just a quick note for the PILOT Committee to be:
There are many of the staff members childern of staff member of both Fay and St Marks that attend our public schools. Are they paying taxes towards the schools? NO! They are awarded housing as part of their contracts or are renting property from Fay and St. Marks. Thus Fay and St. Marks do not pay taxes to the Town of Southborough and their kids are being educated at the cost of town residents.

One little piece of ammunition both schools use against the town is that they provide scholarships to town kids. Well, it just ain’t what it appears to be. Also, people keep bringing up the fact that the locals get to skate free during the holiday break, AND we get to set up Heritage Day on the lower field. BIG DEAL. If you look at all the NON TAXED PROPERTY they own, the loss the town suffers doesn’t even come close.

Are their scholarships they give for a need based low income families? I have been in town for 50 years of the people that attend Fay or St. Marks from Southborough I would say not a one of them fall into that bracket. So the scholarships they give are for who…… families that dish out a bunch of change to go private instead of public and the staff kids are being educated for free in our town school. Big deal about the skating we could go without and redeem tax money instead.

I simply do not understand how the Head of School at Fay can sleep at night knowing the school does not meet its burden as a member of the community.

I do know that Fay has been providing food that is leftover from their dinner meal to the firefighters in Southborough for several years. It is quite galling to learn that Fay has included the “value” of these scraps as part of the PILOT compensation they provide to the town.

Readers may wish to visit the Fay website and read their strategic plan which includes this bullet point:

“Successfully launched the capital campaign, the Power of Partnership, the largest campaign in the School’s history. The campaign is focused on building our endowment to a level that will solidly sustain Fay for the next generation and allow us to improve in two significant areas: faculty/staff compensation and financial aid. The campaign will also fund land acquisition and endow curriculum enhancements called for by the Strategic Plan over the next three years.”

Clearly, Fay has the financial means to contribute a fair amount to the tax burden in Southborough.

Perhaps the Head of School should be reminded of the Fay motto : Poteris Modo Velis (You can if you will). Paraphrasing, you can be a good and valued member of the community of you will contribute your fair share of the tax burden.

Can someone translate this into Latin?: “We Won’t If We Don’t Have To” the real Fay motto

A little something from the May 19, 2009 Board of Selectmen’s meeting. read the last entry:

1. Annual Committee Reappointments. A vote on members of the MBTA Triangle Committee was held to a future meeting. It was voted unanimously, except for Conservation Commission, to appoint members as listed on the spreadsheet dated 5/10/09 and initialed by Mr. Giorlandino, with terms to expire as listed. It was voted 2-0 (Mr. Giorlandino recused himself) to appoint members of the Conservation Commission, as listed on the above spreadsheet, with terms to expire as listed.

2. It was voted unanimously to dissolve the Workplace Safety Committee. A vote on dissolving the Public Health Advisory Committee was held to a future meeting.

3. It was voted unanimously to Approve the minutes of the March 31, 2009 Executive Session.

4. It was voted unanimously to accept a PILOT payment from New England Center for Children in the amount of $40,334.00.