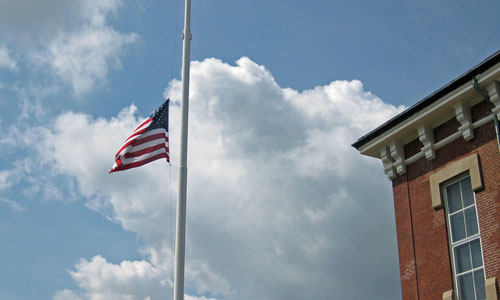 You probably don’t need me to tell you why flags are at half staff today. Governor Deval Patrick ordered them lowered until further notice in honor of Senator Ted Kennedy who died today after a battle with brain cancer.

Update: Flags will remain at half staff until sundown on Sunday, August 30. On Saturday the lowered flags also flew in honor of Officer Michael Paul Davey of Weymouth, who died in the line of duty on Monday, August 24, 2009.

Like all of us, Ted had his faults, but he was kind to his constituents, his family, and his friends. I tireless and generous man who will be missed tremendously. Godspeed Ted………

I wasn’t a Ted Kennedy fan by any stretch of the imagination. But he was a dedicated and loyal public servant and I think he really did have a good heart. (except maybe in 1969) But anyway – RIP.

He was certainly a dedicated politician that served the public well. The best thing about Teddy was that you always knew where he stood on any issue, he always spoke up, was consistent and worked tirelessly to support marginal populations in our society. A true credit to his underlying character…I hope.

His personal life, on the other hand, is another story entirely…