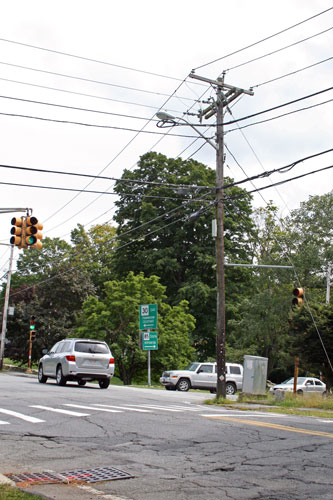 At some point in the next few years, Main Street in Southborough will be torn up to make a host of roadway improvements. When that work happens, a group in town would also like to see the utility lines along Main Street buried to improve the overall aesthetics of the downtown area.

The roadway improvements are being funded by the state, but the town would have to pick up the bill for undergrounding the utility lines.

In September, voters will get their say on two articles that represent the next steps in the undergrounding project. The articles are both administrative in nature — we’re not talking about allocating any money or giving final approval for the work. They’re just bureaucratic stepping stones required by the state.

Article 6 asks voters to accept a report by the Planning Board on the project. Article 7 would enact a bylaw requiring utility companies to remove poles and wires along a public right-of-way if the town asks them to. That doesn’t mean the town is asking them to, it just requires them to comply if we ask them to at some point in the future.

In related news, a public meeting on the Main Street reconstruction project will be held on Thursday, September 17 at the Senior Center. More details in this flier (.pdf).

I’m all for burying cables, and will gladly pay a few bucks in taxes to do so. As your photo illustrates, utility poles and cables are astonishingly ugly – we tend to overlook them because they’re ubiquitous. Stashing them underground is a surefire way to beautify any city or town.

Watch the news………burying them is also a surefire way to increase problems with the utilities. Boston, Worcester, New York, other bigger cities….when something goes wrong underground you can have a hell of a fire which really messes things up. Think things around here are bad during a snow storm? Burn things up underground and see how much of an inconvenience that is. Beautifying, no doubt, until something goes wrong. I would rather spend my tax dollars on something more important that would benefit everyone.

Very unfair to spend this much on underground facilities for only one of the 4 villages, What about Cordaville, Fayville and Southville??? They certainly have more pressing needs

I’m in the village of Southborough, but also agree with Frances about other projects, in all 4 villages, being more important than something that’s purely aesthetic!

I strongly disagree w/ Papa Rosa when he says he would “gladly pay a few bucks in taxes to do so.” Southborough as a town needs to manage its already high taxes in a much better way than it does now, without a few more bucks from each household to pay for something like the burial of utilities.

If it’s a case where the town needs more money because they should be going forward with projects like this, how about taking a look at fees for organizations or people who use certain services? Maybe per-use fees for the private schools use of police and fire? Or, perhaps, sports and/or transportation fees for those who have students using these services in town schools?

Looks like I’m in the minority, at least here. While I respect everybody’s opinion, I’ll stick to my guns on this one: I’m in favor of the buried lines and I’m willing to pay my share for it.

One additional point: The “four villages” image seems antiquated, and I humbly submit it’s a mindset that has held back controlled, reasonable development of Main Street. Try to view Southborough through a newcomer’s eyes. Fayville is what, a gas station and a couple of strip malls. Southville is Fitzy’s and a train station. Cordaville is … a sub shop and an office building that has never been leased.

If Southborough wants to better present itself, the key is to make Downtown more inviting and vibrant while retaining a small-town feel.

I do not believe the money would be well spent to bury the utilities on Main Street because I do not believe this will make the town center more inviting and vibrant. I would support something that would bring that effect and would bring people to the center for shopping and dining. I would love to hear suggestions to accomplish this idea.

Here’s a thought. If we bought the old Diebold building and moved the police and fire departments to a central location, could we use the current fire and police locations as a central area for new businesses including restaurants? I would love to see an architect’s perspective on this.

Additionally, I believe we have also authorized approximately $120,000 from Community Preservation Act funds (which is actually a part of our property taxes) to simply replace the trees and lights on the small sliver of land on Cordaville Rd just north west of the intersection of Southville Rd and Cordaville Rd.

That small sliver of land was re-landscaped as part of the MBTA station project. Now we are going to spend almost $120,000 to “spruce it up” ?

We can debate at town meeting for seemingly endless periods about the most mundane issues yet we blithely pass articles for large amounts of money with hardly any discussion. We are a fickle community.

I agree with Marty that money would not be well spent on burying the utilities on Main Street. Afterall, we are down a ladder truck.

I do agree with you as far as Southborough being one community as opposed to four villages. This is why I didn’t separate any of the villages in my reply, and referred to them as “all four.”

Those who wish to hold onto the four villages concept should do so, but with follow-through. People with PO Boxes at the Fayville (01745) post office have put Southborough as their address. Yes, they have a prefix to their POB to help differentiate it from the Southborough POBs (01772 zip), but for some reason they insist on using the Fayville POB number with the Southborough town designation! Yes, mail ha gotten crosed between the town’s POBs this way.

Holding on to the heritage of having 4 villages withing the town is great, it’s part of what makes Southborough 31st in the top 100 towns to live in according to Money Magazine, and is even enshrined in the town flag that my great-uncle designed. However, when it comes to spending money that is in the Town of Southborough coffers, it should be done ONLY with an eye toward the betterment of Southborough as a whole. I still don’t see where the subject proposal benefits the town, as a whole, enough to offset the cost. We’re charming enough!!!!

And, I agree with Marty re: being able to endlessly debate about the most mundane issues at town meetings, yet “blithely pass articles for large amounts of money with hardly any discussion.” Penny wise and pound foolish.

“Charming enough?” I beg to differ. When we moved here I remember the realtor joking as she drove us into the center of town “now don’t blink or you will miss it!” I thought Main Street was tatty looking then and it is even more so now – cracked asphalt, disintegrating curbs, horrible sidewalks, ugly train tracks with an abandoned lot on the corner, one small stretch of semi-appealing shops, but not enough to make it worth anyone’s while.

I support the villages concept. Maybe reviatalizing the villages will get people walking in their neighborhoods, interacting and leaving their cars in their driveways more often. Heck, maybe it will reduce traffic a bit. Maybe pre-drivers will have a place to go to get a soda and met their friends without their mothers driving them around town(s). We need pedestrian activity in this town. Benefitting individual neigborhoods DOES benefit Southborough as a whole. People need to start thinking as a community and stop the “if it doesn’t benefit me directly it is a waste of money” mentality.

And I also support revitalizing Main Street and burying the power lines. It is a great first step that will contribute to the maintenance of all our property values.

I have suggested at earlier meetings relating to underground utilities that, short of placing wires there now, it might be practical to at least bury PCV tubing while the surface work is under way – this to accomodate any further wires or replacement wires as time goes by. This might be a relatively inexpensive compromise.
The notion of undergrounding my have been inspired by the Natick initiative – downtown beautification – which is nice thing to see.
These thoughts may be totally impractical. So what?