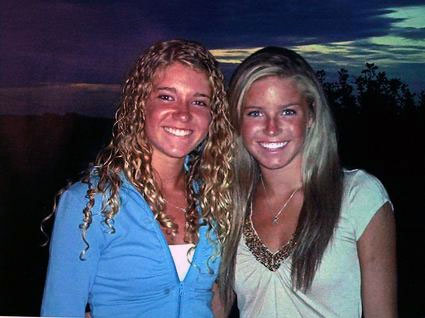 Above: Shauna and Meghan Murphy lost their lives in a car accident in 2005 (Photo from the Murphy Sisters Foundation)

Four years ago today Southborough sisters Shauna and Meghan Murphy were killed in a car accident on Northboro Road. It’s a day many in town will never forget.

“I drive by the site every day,” Southborough Fire Chief John Mauro Jr. said recently. “There’s not a day that I don’t think about it.”

Mauro was one of the first responders on the scene that night. “The car was upside down impaled on the telephone pole. Wires were arcing, they were wrapped around the car. Someone inside was calling for help, but we couldn’t touch the car because of the live wires.”

The accident — a result of alcohol and high speed — killed Shauna, 17, and Meghan 15, and critically injured their friend Melissa Smith.

Shauna and Meghan’s father Chris Murphy said the anniversary is a time of “intense reflection” for him and his family. “They got so much out of life at such a young age,” he said of the sisters.

Murphy said if he could turn back the clock he would have made sure his daughters had been better trained behind the wheel. It’s the reason the Murphy Sisters Foundation, which the family formed in the girls’ memory, is committed to raising awareness about safe driving principals among young people.

“Shauna was doing 65 in a 35 mile per hour zone. Somebody could have said you’re going too fast, slow down. I don’t think that conversation ever happened,” Murphy said.

The Murphy Sisters Foundation recently subsidized the cost of “skid school” training so over 50 high school students could learn crash-prevention skills. Murphy said it’s training the students “will carry with them all through their life.”

None of the students currently at Algonquin were there when the accident happened four years ago, but the impact of that night is nonetheless strong.

“It changed our school,” Algonquin junior Tracy Baldelli, who was a Trottier student at the time of the accident, said.

Murphy said his foundation works to make sure students understand what happened to Shauna and Meghan. “We’re constantly in their face,” he said of the current Algonquin students. “So I don’t think their story will be forgotten.”

“Kids have this sense of entitlement that they’re going to make it to their destination, but they’re not invincible,” Murphy said. “It doesn’t matter how pretty you are, how smart you are, how much money you have. The wrong decision can be fatal.”

I am so sorry for you guys. My prayers are with you. Stay strong and just remember they are still in your heart. Sorry again.