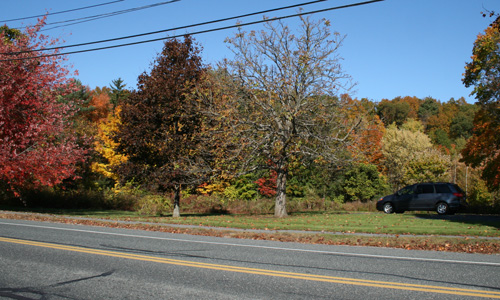 A vacant lot next to Fayville Hall on Central Street will not be home to a new skateboard park. At a Board of Selectmen meeting a few weeks ago, Recreation Department Head Doreen Ferguson presented the site as an option for the skate park, but selectmen unanimously opposed the idea citing safety concerns.

“I thought it would be a great family area,” Ferguson said noting the ball field and playground just across the street at Fay Field.

But selectmen said traffic on Central Street was a concern, particularly with kids crossing the street to go between the skate park and the playground. They also thought the lot would be “too tight” for the park.

That means attention turns back to Choate Field at Woodward as the primary site for the skate park. Ferguson said she hasn’t yet talked to officials at Woodward about the plan because she was waiting for the go-ahead from selectmen, but she “heard through the grapevine that they’re concerned.”

Many of you have asked whether the deed on Choate Field precludes its use as a skateboard park, but Ferguson said it does not.

Ferguson said there has been a lot of interest in skateboarding from eight and nine year olds, so situating the park at Woodward makes sense. She also said that there aren’t any other town-owned lots that would be appropriate for use as a skate park.

Hmm… Woodward? That is an incredibly tight place, with heavily used soccer and ball fields, parking, and the other spaces already utilized by the school. Inviting older kids to “hang out” at a school geared towards younger students (2nd-3rd grade) seems like a puzzling mix. It would seem unwise to encourage loitering at a potentially tempting target for mischief such as a school. I could be missing something?

i don’t think you’re too far off base. Of course I’d like to give the skateboarders the benefit of the doubt that they aren’t all troublemakers. I’m a little more in line with your thinking that the Woodward field already has a lot of usage. The school itself uses the field all the time for gym. What are they supposed to do if some of the field gets used up for skateboard stuff. I’m more in line with Fayville location but I do see the concern with crossing the street. It’s a tough thing to resolve.

They cannot use Choate Field. The grant of that land to the town limits what can be done on that field. Having read the deed in the past I don’t think that a skateboard park would qualify nor should it. The selectman are worried about kids crossing Central Street, but then want to put this park on Rt. 85, brilliant. How about over by Trottier and Neary Schools

I’m with Peter…..the town has the space on the school properties. No interference with games, no busy streets to cross.

I would think there is some space over @ Neary/Trottier that could be used. It’s usually pretty quiet over there on weekends even when there are soccer games being played. The kids would be far enough away from a busy street.