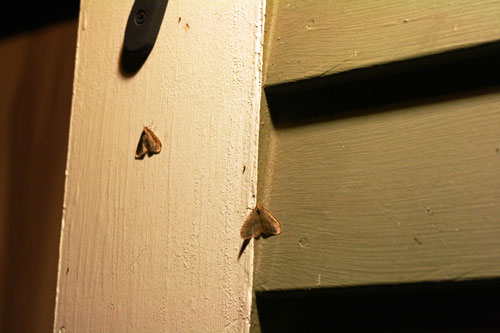 It sure has been a strange year for insects. First it was the ladybugs, now it’s the winter moths.

The winter moth is a relatively new pest in Massachusetts, having been introduced first in Nova Scotia from Europe in the 1950’s. Populations in Massachusetts have become significant in the past 10 years or so. From the UMass Landscape, Nursery, and Urban Forestry extension program:

Winter moth is at its heaviest numbers east of Route 495, on the North and South Shores, including Martha’s Vineyard and most of Cape Cod, as well as in towns in and around Boston. However, it is also found as far west as Worcester.

The moths emerge in late November and can stick around throughout December and into January if conditions are right. They look for mates and then lay eggs in tree bark or other places. Caterpillars hatch in the spring and can do significant damage to the buds of deciduous trees like oaks, maples, cherries, and crabapples.

Learn more in this fact sheet (pdf) about the winter moth.

I don’t remember seeing so many of the little buggers last year? Do you?

Are there any suggestions for traps or other non-toxic ways to stop these pests?

A reader pointed me to a story about the moths in today’s Boston Globe. Here’s what it said about controlling the damage the larvae may do next spring:

Homeowners with low-to-the-ground foliage can use chemicals purchased from a local garden store to stop the moths from chewing through their shrubbery, Briggs said.

Not exactly non-toxic, though.