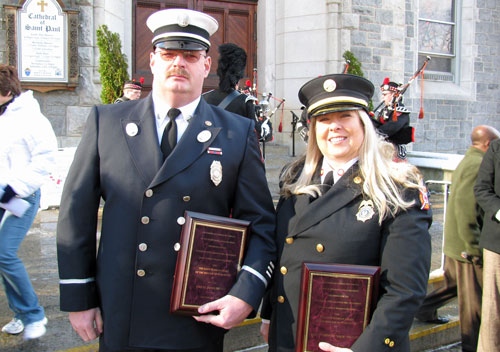 Two members of the Southborough Fire Department, Safety Officer Jack Peltier and his son First Lieutenant James Peltier, were honored recently by the Worcester Catholic Diocese. They were awarded the St. Florian Award, named for the patron saint of firefighters.

Two years ago, while reviewing Federal Fire Act Grants submitted by fire departments throughout the country at the National Firefighting Academy, Jim and Jack met a firefighter from Arkansas. Her name was Dayna Hilton from rural Johnson County. Dayna shared with the Peltiers the plight of her fire department, and how they could not afford to replace an aging, unsafe and unreliable fire engine.

Upon their return home, Jim and Jack organized an effort to acquire a fire engine and the all of the equipment needed, to give the residents of Johnson County, Arkansas a reliable fire engine. They contacted several fire truck dealers and convinced one to contribute an engine which they had recently acquired in trade.

Upon receipt of the truck, Jim, Jack and others whom they organized, worked on the truck to ensure it was in sound mechanical order. They continued to acquire donations of equipment such as hose, tools, and other basic firefighting equipment for the truck. They searched for a company to transport the truck to Arkansas from Marlborough, where the truck was stored. The National Guard came to the rescue through the Peltier’s efforts, and delivered the “new”, fully-equipped engine to Johnson County RFD#1 where it is in use today.

Most recently, Jim and Jack volunteered hundreds of hours each on Southborough’s Aerial Ladder Committee. Nearly two years ago, Southborough’s only ladder truck, purchased used in 1994, had to be retired due to safety and mechanical issues. Jim and Jack provided their talent in the form of their vast knowledge in the fire service, and time to investigate and research various options for an aerial which would be tailored to Southborough’s specific needs.

The commitment and dedication by Jim, Jack and the Committee paid off as voters recently approved funding for Southborough’s first new aerial truck, in spite of the worst economic times since the great depression.

On a daily basis, Jim and Jack Peltier work to ensure the safety of the firefighters they work with. They have purchased equipment on their own to ensure a fellow firefighter’s safety. They volunteer their time to teach others in all aspects of firefighting.

Firefighter Dayna Hilton traveled from Arkansas to be present for the award. FF Hilton accepted the award for Safety Officer Peltier, who was unable to attend.