This is the latest in an ongoing series about historic places in Southborough. The information all comes from a survey of historic properties done in 2000. A copy of the survey is available at the Southborough Library. To see other posts in the series, click here. 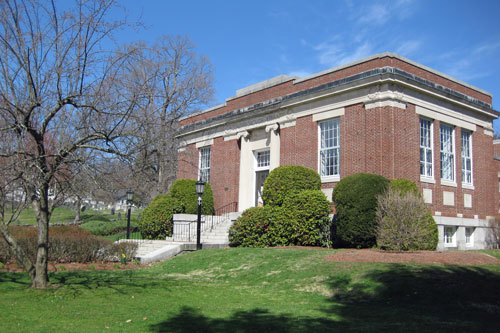 Picture this. The year is 1852 and the residents of Southborough are gathered at the old Town House for the annual town meeting. On the warrant is the question of whether to establish a public lending library. The Boston Public Library had only been founded four years earlier, so public libraries are still a rarity.

Local physician Dr. Anson Hobart makes a case in support of the library, but residents are concerned about the cost. Then the distinguished Col. Francis B. Fay rises to speak. In his hand he holds a bag containing 500 pieces of silver. He pledges the money toward the library, but only if other residents come together to match the funds.

Right there on the floor of town meeting, other residents step forward and the matching funds are raised. Town Meeting approves the warrant article and names the library in honor of Col. Fay.

(If only town meetings were still that dramatic.)

That’s how the Francis B. Fay Library, which would eventually become the Southborough Public Library, became one of the first free municipal libraries in the country. Col. Fay would go on to donate an additional $2000 to help expand the library’s collection and create an endowment.

The library building we know today wasn’t constructed until the early twentieth century. Before that point, the library operated out of the back room at the old Town House. The Town House was destroyed by fire in 1869, but most of the books survived. The library temporarily set up in the post office, which at that point was across the street, until the new Town House was built in 1870.

On the urging of many residents, including Col. Fay’s son Eugene, the Library Trustees in 1908 voted to construct a new building. They would use land donated by the Burnett family. The next year, Town Meeting appropriated $35,000 toward the project. Construction was finished in 1912.

When Fanny Buck retired in 1914 her assistant Sadie Stivers took over. Miss Stivers, who upon her marriage became Sadie Hutt, held the position for more than 50 years, retiring in 1966.

In 1989 the library was expanded into the configuration we know today with a new two-story addition housing stacks and a reading area upstairs and a children’s room downstairs.

Very interesting!! Thank you for the history lesson. I say we try to make our next Town Meeting as interesting as that one back in 1852!