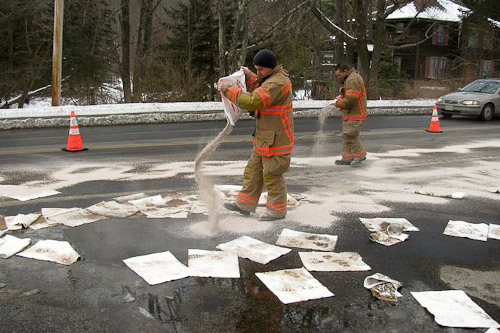 On Christmas eve day Southborough firefighters responded to yet another fuel spill. It was the the fourth hazardous material spill in a week. This one was at the gas station on Cordaville Road near Woodland Road. Here are the details sent in by the Southborough Fire Department.

Firefighters responding to a passer-by’s call for an odor of gasoline on Cordaville Road near Woodland Road discovered a gasoline release during the late morning on December 24, 2009.

Between 10 and 40 gallons of gasoline was discovered on the ground of a service station, as well as in the roadway in front of the station. Responding firefighters mitigated the release by applying absorbent material over the liquid to prevent the release from spreading. One lane of traffic was blocked for over an hour while the absorbent material worked on the release.

The service station was closed; however the owner reported to the scene, and worked with officials to determine how much gasoline was released.

The Massachusetts Department of Environmental Protection Emergency Response Division was notified and a representative responded. A clean-up company responded to ensure the release did not spread and to contain and remove the contaminated materials.

This was the fourth significant haz-mat release in Southborough in a week. Two truck crashes resulted in over 100 gallons of diesel fuel being released in separate incidents on Interstate 495 since last Thursday. Also, a car lost the contents of its gas tank on Pine Hill Road which was estimated to be in excess of 10 gallons.

Photos courtesy of the Southborough Fire Department. Click to enlarge and view as a slideshow.