This is the latest in an ongoing series about historic places in Southborough. The information all comes from a survey of historic properties done in 2000. To see other posts in the series, click here. 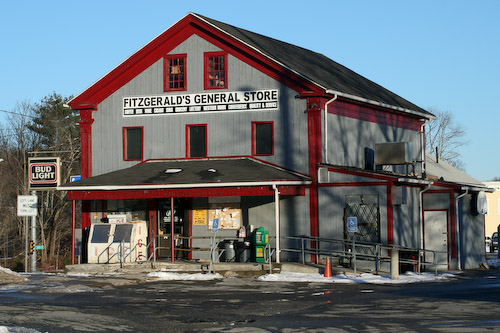 Talk about longevity. The building that is today home to Fitzgerald’s General Store was built in the 1850’s as a general store for the villages of Cordaville and Southville. More than 150 years later, ownership and names have changed, but the building still serves the same basic purpose.

By the mid-1800’s Cordaville had become a bustling mill village, home to a cotton and woolen mill on the south side of the Boston & Albany railroad tracks. The mill complex was destroyed by fire in 1855, but was rebuilt by owner Milton Sanford.

It was around this time Sanford decided the village needed a general store and post office. It’s not known exactly when the building at the corner of Cordaville and Southville Roads – just across the tracks from the mill – was built, but records show it was standing by 1857.

A general store and post office was set up on the first floor of the two-story building. For a while it was the only general store in the south part of Southborough, and it served not only Cordaville, but also Southville and sections of Hopkinton and Ashland. In 1875 a second general store was built in Southville.

The second floor of the building was used as a meeting hall. Originally called Wilson’s Hall, it later was known as Cordaville Hall. The space had a inlaid dance floor and hosted Southborough’s first Improvement Society meeting in 1861, as well as meetings of the Southborough Literary Society.

The workforce of the cotton and woolen mill, along with other mills on the south side of town, was largely Irish, and made up Southborough’s largest Catholic population. So it’s no surprise that the first Catholic masses in Southborough were held in Cordaville Hall. In fact, the parish that was to eventually found St. Matthew’s Church first met in Cordaville Hall after they were refused permission to hold mass in other Southborough meeting halls. For his part, mill owner Sanford only agreed to let the Irish Catholic parish meet in the hall after a sizeable bond was paid in case of damage. (Something tells me he didn’t make the same request of the Southborough Improvement Society.)

Sanford sold his mill to the Cordaville Mills Company in 1864, and the general store along with it. While the company owned the property, the store continued to operate under a series of independent proprietors.

By the early twentieth century, the mill had fallen on hard times, and in 1928 all their real estate was sold at public auction. Thomas F. Fitzgerald, who had been the proprietor of the general store since around 1907, bought the store property. Members of the Fitzgerald family continued to own and operate the store – along with the post office still housed in the building – until about 1960.

The store has changed hands a couple times since then, but we all still call it Fitzy’s.

I grew up in Cordaville. Cordaville was named after the mill owner’s wife, Cordelia. Fitzy’s, as we called it, was a landmark. It was run by two old maid sisters and their brother. You could buy cards, read, penny candy and soda from the old cooler plus get you paper and mail. For a short while when i was a kid I worked for them.