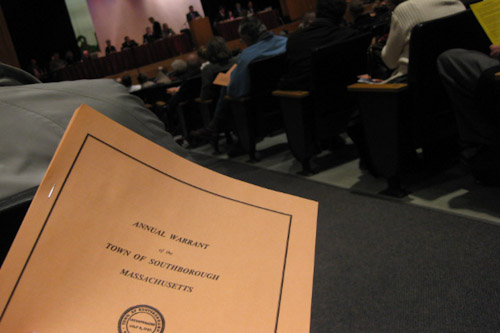 We all know it’s going to be a tough budget year. The signs are already abundantly clear. The decisions we make at town meeting will matter even more this year, but how as town meeting voters do we know the choices we’re making are the right ones?

The Advisory Committee is at the beginning of the annual budget season again.  For many years Advisory and Selectmen have gone through the budgets separately. We then meet together to try to present as much of a unified recommendation to Town Meeting as possible.  Usually the two boards have agreed on 95% of the line items before Town Meeting.

Because of the complexity of the budgets this process has generally resulted in giving the average voter at Town Meeting very little practical choice about what to vote for.   A voter sitting in the audience who wants a 10% cut in property taxes, for example, or who wants instead to ensure that services aren’t cut, has a difficult job, sometimes an impossible task, to ask for the right amendments to see that their position gets brought to a vote.  For example, certain line items, such as debt repayment, cannot be legally cut, nor is there any point to over-funding them.  Others, for example benefits, can only be cut if line item budgets result in proportional reductions in staff. With upwards of 90 line items subject to Town Meeting vote, this is too complex for anyone not involved at the Advisory Committee level to figure out.  As a result of this complexity we have had a “one candidate” Town Meeting system for a long time, in which the voters at Town Meeting get to decide some minor items, but are powerless to effect major decisions.

When times are flush with money for the Town, as they were back in the 1990’s, this “one candidate” Town Meeting budget process may not have been much of a problem.  On the other hand, this coming budget year is probably the toughest we’ve faced in 25 years.  As a consequence of the fundamental questions facing the Town, Advisory Committee has been debating whether, in addition to presenting our usual recommendations, we should also prepare information that would give voters clear choices.

For example, Advisory Committee could prepare Town Meeting handouts that would give voters three clear alternatives: a column of numbers for level services, a column for no tax increase (which would entail some service reductions), and a column for a 10% property tax cut.  As always we would have our recommendation, but voters would be free to vote for their preferred approach and would have the information they need to do so.

The preparation of such alternatives is more work for Advisory, so if there isn’t much interest in it, maybe we won’t do it.  I am interested in hearing from My Southborough readers whether they would like to have such options available to them as they sit at Town Meeting?  Secondly, if they knew such options would be available, would they be more likely to attend Town Meeting?

So, what do you think? Do you like the idea of more options to choose from? Or would it make things even more confusing? Would having more options make you feel like your vote matters more? For those of you who aren’t town meeting regulars, would it give you more reason to attend?

I believe giving as many options to voters as possible is a good thing – how the users consume the data is upto them.

This will be my first year (if I’ve not already missed!) to experience the town meeting & budgetary process – looking forward it.

I have not attended Town Meeting since moving to Southborough but plan on attending this year. I believe the approach you laid out, John, allows more input from the residents than it appears we have had in the past. I agree that more options will raise the complexity level of the budget discussions, and likely the level of confusion as well. That being said, I feel we and our fellow residents need to take the time to understand the options available to us if we hope to help shape the direction of our community. I think it is a great idea and am looking forward to Town Meeting!

You make a persuasive case. I will support the effort to provide town meeting members fiscal alternatives.

I think that multiple budgets will lead to confusion and dilute the “no tax increase” message. Are folks really supposed to vote on a variety of budgets on how many days? Is everyone expected to study multiple budgets? Can this truly be realistic?

More questions than answers, I fear.

All the alternative budgets can propose a zero increase or decrease. That will ensure zero budget increase. JohnB does raise an excellent point though. How does one express one’s opinion in the Town Meeting? You tried this last year and didn’t quite work, right? Since it was an all or nothing deal.

But I agree with you that to avoid confusion, we need only a handful, maybe two besides the one proposed by Selectmen.

Creating real choices means that one of the choices would be to maintain service levels, even if that means that the result is to increase taxes, as Town Meeting has done many times in the past. The idea is that views you may disagree with, as well as your own, be available to voters.

I had assumed that the Selectmen would already propose something like that. But may be not …