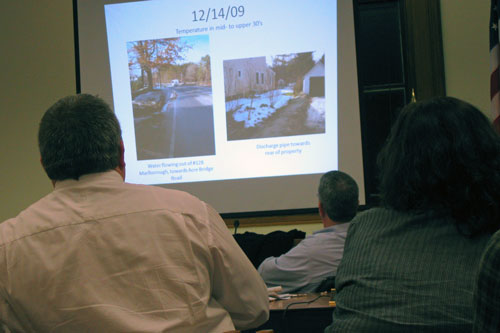 It’s been a long, drawn-out, complicated affair. One that has pitted neighbor against neighbor and resident against town. And it doesn’t look like it’s going to end anytime soon.

Last night selectmen officially declared that water being pumped from the basement of Stephen Stanechewski’s Marlboro Road home, water that then flows out onto the roadway, creates a public nuisance. During the winter months, the water freezes and creates slippery conditions for drivers. The selectmen ordered Stanechewski to fix the problem “immediately” by temporary means, and then to work with town officials to come up with a permanent remediation plan within 30 days.

But the dispute is unlikely to end there. “I suspect there will be private litigation involving this matter,” Chairman Sal Giorlandino said.

Town Engineer John Woodsmall said the problem is not surface water, but groundwater that seeps into the basement of an addition Stanechewski built in 2000. The town said Stanechewski never received a certificate of occupancy for the addition because he failed to provide a drainage plan for the structure despite repeated requests to do so.

While this issue has been before the board of selectmen several times over the past year — the dispute actually stretches back to at least 2001 — the fact that Stanechewski never got a certificate of occupancy for his addition was only just revealed last night.

Ultimately, selectmen agreed that the source of the water was not the issue. “The end result is water is coming out of your basement through mechanical means and it’s ending up on the street, and that has to stop,” Selectman Bill Boland said.

Stanechewski, the DPW, and the town building inspector are to appear before the selectmen again in 30 days with a status report.

You can read more of the gory details on last night’s meeting in this article in the Metrowest Daily News.