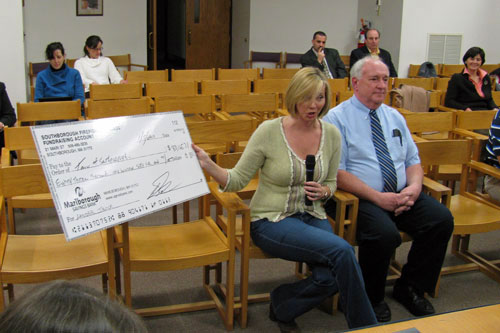 The Fire Ball Committee handed over a big check to the town of Southborough last night — both literally and figuratively.

More than $83K was raised during last year’s Fire Ball, a fundraiser to help with the purchase of a new aerial ladder truck for the town. Last night, members of the Fire Ball Committee presented selectmen with a check for the money they collected.

Fire Chief John Mauro Jr. said members of the Fire Ball Committee put in “thousands of hours of work” and spent a lot of late nights at the Fire Department pulling everything together. “I thank them from the bottom of my heart,” he said.

Selectwoman Bonnie Phaneuf said the Fire Ball and the work of the committee as a whole brought the community together. “It was a great event for all of us.

“Great citizenship was displayed by members of the committee,” Selectman Sal Giorlandino said. “Let this be an example of ‘things can be done’.”

The ladder truck is on order, and committee member Jim Colleary told selectmen the chassis is currently in production. The fire department expects to get the truck by late summer. 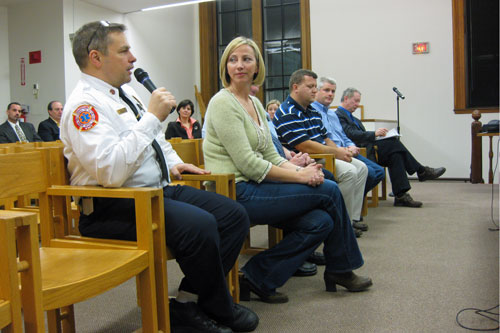 Fire Chief John Mauro Jr. offers words of thanks as Rebecca Waterfall and other committee members look on