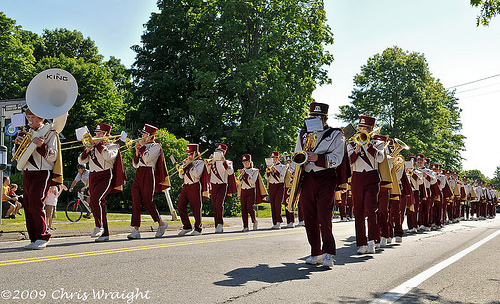 Thanks to a recent decision by Northborough, the Algonquin marching band may need to be two places at once on Memorial Day this year.

Each year the Algonquin band marches in the Southborough parade in the morning and then heads over to Northborough to participate in their parade which take place in the afternoon.

But no longer. NorthboroNews,org reports parade organizers asked for approval to move the parade from the afternoon to the morning in an effort to increase attendance. After some debate and some dissension, selectmen agreed to approve the change.

That means both parades will happen in the morning. The parade in Southborough typically starts at 9:00 am, while ceremonies in Northborough will have a 10:45 am start.

The veterans’ agent for Northborough told the Worcester Telegram & Gazette that they’re talking with Algonquin about the possibility of splitting the band or sending a few students to Northborough to play the national anthem and taps. If not, they’ll consider hiring an outside band.

I was actually one of two dissenting votes on this issue. It passed by majority only. I was not comfortable with the change in schedule ( a route change is ok) due to the sacrifice that will probably have to be made by Northborough re: presence of the ARHS Marching Band. It is not reasonable to split the band in half, and have the instrumentation be optimal in each. It is a band that represents both communities, and is not more for one town than the other. Also, the band is too large to be able to move that quickly to be able to perform in each town on the same morning.

Leslie Rutan, Northborough Board of Selectmen

Let’s make a deal:
1) Southboro will let Northboro can have the ENTIRE band for the day.
2) Northboro keeps its word and agrees to give Southboro the share of reimbursement for the regional high school in Northboro as agreed upon when the school was built.

Just a thought since you seem to be so concerned with fairness.

Are you kidding me! This is very sad indeed. Do they really think that changing the parade to the morning will bring out more people? I don’t think it matters what time you have the parade, the people who are going to come out are going to come out regardless of if the parade is in the morning or the afternoon. Memorial Day has been a celebration in my family FOREVER and it wouldn’t matter when the parade was, we would be there. Will people stay home for the weekend because the parade is in the morning? Doubtful. No, you absolutely shouldn’t split up the band, that’s just ridiculous. Maybe Southborough gets them one year and Northborough gets them the next? Maybe we could cancel the parade entirely and everyone to go Southborough one year, then Northborough the next…. Think of all the money the towns could save by having the parade “every other year”.

Northborough changed their parade time, Northborough should go ahead without the band knowing we have our parade same time each year! What was Northborough thinking?