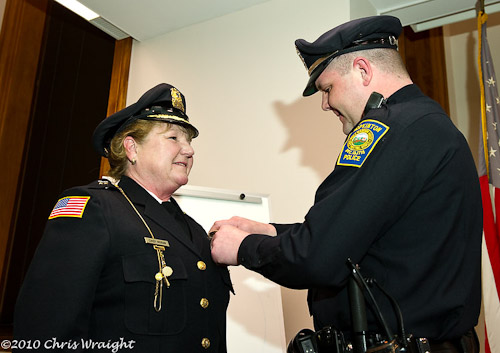 Jane Moran was sworn in as police chief last night in front of a packed crowd of colleagues, friends, family, and other well-wishers.

Moran became interim police chief in November 2009 after the death of Chief William Webber. At last night’s ceremony, both Chief Webber and former Police Chief William Colleary were honored with a moment of silence.

Calling her road to the chief’s spot a “challenging process,” Moran thanked her supporters. “This town has been so gracious to me all through the years,” she said. Moran’s career in the Southborough Police Department has spanned 30 years.

Moran also praised her colleagues on the police force. “The town is so fortunate to have such a dedicated, educated, intelligent force,” she said. “I want you to know you’re in good hands all the time.”

A reception for the chief followed at Pilgrim Church.

Southborough photographer Chris Wraight was at the ceremony last night, and took these photos. Click on an image to enlarge and view as a slideshow.

Congratulations Chief! We are so very fortunate to have you in our town!

Wow! Best wishes to Jane and her family. We recognize everyone but the grandchildren. Hail to the Chief !