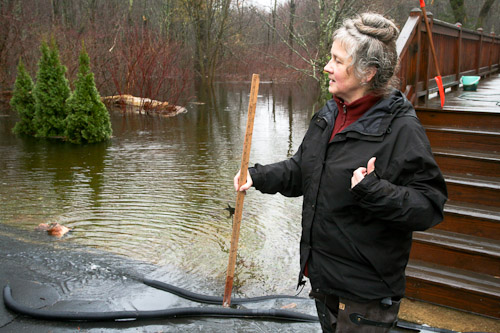 Fire Chief John Mauro Jr. said as of this morning, more than 4.5 inches of rain had fallen in the past two days. That’s on top of the 6 inches that fell two weeks ago. Already saturated ground meant there was little place for the new accumulation to go.

Over the past two days, the fire department responded to nearly 20 calls for flooded basements. Mauro said in many cases water threatened the home’s utilities.

Some of the hardest hit areas in town were along the swollen Sudbury River. Mauro said the river crested its banks early this morning and threatened several homes along Wood Street. Deb Costine’s house was one of them. “This is the worst I’ve seen it in 27 years,” she said. River water lay more than knee-deep throughout Costine’s back yard, reaching all the way up to her house.

A section of Wood Street was under as much as five inches of water this morning, but Mauro said the water appears to be receding now.

The Sudbury River also spilled its banks near River Street (Route 85 near the MBTA station) and flooded a nearby parking lot. At the Sudbury Reservoir Dam in Fayville, water crested the spillway.

But Mauro said all things considered, Southborough is lucky. “We’re at the head of the Sudbury River,” he said. “It’s downstream where you see more problems with flooding.”

No one in Southborough needed to be evacuated because of flooding.

I drove around town this morning taking photos of some of the usual trouble spots. Click a thumbnail to enlarge and view as a slideshow.

We’ve had a lot of rain, and the flooding to go with it, but we saw much worse in the late 1970’s and again in 1987. The only thing we have going in our favor this year is the fact the the snow has long been melted and there wasn’t a heavy frost in the ground.

Thanks, Nancy! I actually thought of you when I took the boot shot.

BTW, does anyone know why there was so much foam on the water going over the dam at Deerfoot Road (see the second to last photo in the gallery)? Like a big mug of beer, except it didn’t smell nearly as good.

The foam is usually caused by proteins in the water. In the case of heavy flooding rains, the stuff we put on our lawns and in our septic tanks has a tendency to increase this.