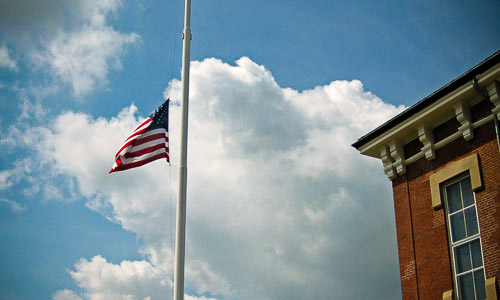 Flags in Southborough and across the state are flying at half staff today in honor of former Minority Leader of the Massachusetts House of Representatives Francis W. Hatch, Jr., who died Thursday, April 8, at the age of 84. Flags will be lowered until further notice.

From Hatch’s obituary in the Boston Globe:

A Republican minority leader in the Massachusetts Legislature known as an old-style Yankee, Francis W. Hatch Jr. was passionate about the environment and authored the Hatch Act, the state’s 1965 landmark wetlands protection law.

David Bartley, Democratic speaker of the Massachusetts House during Mr. Hatch’s tenure, described him as “one of the finest and most able Republican leaders the Legislature ever had. He had integrity, decency, and dignity.’’

Mr. Hatch died Thursday at his Back Bay residence. He was 84. His son, George, of Wenham, said his death was caused by sepsis. Mr. Hatch had been active in environmental and civic projects until a week before he died, his son said.