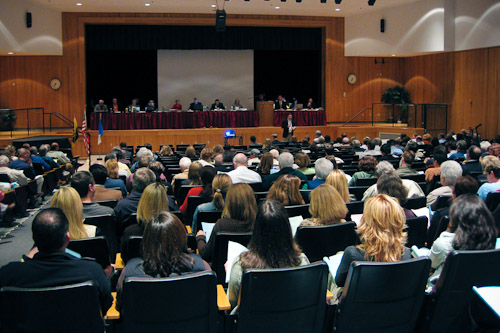 We actually got through more of the warrant last night than I thought we might, but there are still plenty of questions left on the table when town meeting resumes tonight. While it’s historically less well attended, day two is as important as day one, and this year is no exception.

Just because your pet budget got favorably approved — or not — last night, doesn’t mean that’s the way it will stay. Anyone can ask for a budget to be revisited, and with enough votes, the decisions on day one can be reversed on day two. If there’s a budget you particularly care about — schools, library, police, anyone? — it’s in your best interest to show your continued support tonight.

As for the remaining articles on the warrant, here’s a rundown of what’s in store for voters this evening.

Sure you approved the budgets, but how will you pay for them?
The question of how to fund both operational budgets and capital items this year is not a trivial one. In fact it’s one that’s engendered pages and pages of thoughtful debate on this blog. It comes down to two basic options: raise taxes or dip into the town’s stabilization fund (or both, really). It’s an issue people have strong opinions about, but ultimately voters will decide.

Technology for the schools, a sander for the DPW, a cruiser for the police department
The Advisory Committee and the Board of Selectmen are at odds over a number of capital items, including $89K for school technology (Advisory says yes, selectmen say no) and whether to replace one of the town’s police cruisers (Advisory says no, selectmen say yes). Also up for consideration is whether to purchase new equipment for the DPW — a sander and a pickup truck — and how much to spend on maintaining the town’s roads.

Two feasibility studies
As part of the Main Street reconstruction project, a group in town is lobbying to bury the utility lines strung along Main Street. Tonight they’ll ask voters for $30K to do a feasibility study. Parkerville Road residents hope you’ll be willing to spend $33K on a study to get to the bottom of chronic flooding in the area.

Police details or flaggers?
Police Chief Jane Moran has proposed a change to town bylaw that would give her the authority to work with the state to determine when and where police details should be used instead of flaggers on road construction projects. Currently the state has sole control. Moran has previously spoken out against the use of flaggers.

How to spend CPC funds?
There could be some interesting debate on this normally sleepy topic (last year all CPC articles passed without so much as a peep). The state used to match CPC funds collected by the town at a one-to-one level, but they’ve reduced that over time to about a 30% match. Some residents at town meeting last night questioned whether we should continue to participate in the program. The question of whether to continue collecting CPC funds isn’t on the warrant, but options for spending the money are. On the list are funding for affordable housing, Chestnut Hill Farm, creation of the Stony Brook Museum at the Nichols House, and completion of Triangle Park.

Day two of town meeting starts tonight at 7:30 pm at Trottier. See you there.