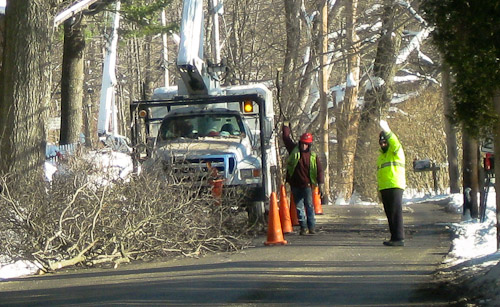 What was billed as a bylaw change to modernize outdated language in the town’s traffic code at town meeting on Tuesday night, became a debate about civilian flaggers versus police details. When all was said and done, voters rejected the attempt to give the police department more control over the use of flaggers.

Police Chief Jane Moran, who sponsored the article, said the current bylaw language is ambiguous and outdated, and doesn’t address issues of public safety. One of those public safety issues is the use of civilian flaggers.

The state allows the use of civilian flaggers on its projects, and Moran told voters her proposed bylaw change wouldn’t circumvent that state law. Rather, the new bylaw would “strongly suggest” that the state consult the town “so we can work out a solution that works for all.”

Moran said flaggers are a threat to public safety because they have no first responder training, don’t know the local roads, have no authority to enforce motor vehicle laws, and are not required to undergo criminal background checks.

She also said they cost more (an issue already being debated on this blog).

Moran said civilian flaggers get up to $65 per hour, including overhead costs like health insurance and social security. “That comes out of your state taxes,” she said. “When police details are out there, we charge $39 per hour and it’s paid for by the vendor.”

Moran said the use of police details has earned the town $44K since 2008.

But some voters questioned Moran’s numbers.

“I’ve heard that number before, and I don’t buy it,” said resident Kelly Roney.

The Board of Selectmen supported Chief Moran’s article, but the Advisory Committee did not. “Advisory didn’t support it because we felt the state was making progress, and we didn’t want to throw roadblocks in its way,” Butler told voters.

When it came time for a vote, Town Meeting sided with Advisory, and the article failed by a wide margin.

As i’ve mentioned before, the proposal was too complex and needed to be broken into discrete parts…. and the Chief clearly needed to be better prepared… her remarks were rambling and disjointed. More prep next time, Chief, and maybe you’ll get what you need.

$65 per hour for a civillian flagger because of “prevailing wage”? Prevailing where?

Talk about deliberately sabotaging any attempt to save money.

At what point are we officially declared held hostage by our own government at the behest of public employee unions?