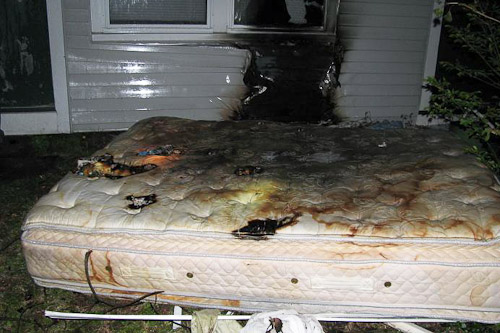 From the Southborough Fire Department:

A resident of an East Main Street apartment building was transported to U-Mass Marlborough Hospital with non life-threatening injuries after a mattress fire in her apartment Thursday night.

Firefighters responded to the 11:25 PM call for fire alarms sounding in the building. Upon investigating, firefighters found a mattress fire in a second story apartment, and the resident attempting to extinguish the fire. Heavy smoke was found in the bedroom with a heat condition starting to build.

Firefighters removed the occupant to safety outside, and removed a window to alleviate the smoke and heat condition. The burning mattress was then thrown out of the window where it burst into flames upon impacting the ground. Slight damage to the outside of the structure occurred from the burning mattress.

The injured occupant was transported by a mutual aid ambulance from Marlborough (Patriot Ambulance) with non life threatening injuries.

Firefighters were clear of the incident by 12:54 AM on April 16th. Residents were allowed to return to the building.

The cause of the fire is under investigation by members of the Fire Department Fire Investigation Unit.

You can see more photos on the Southborough Fire Department website.