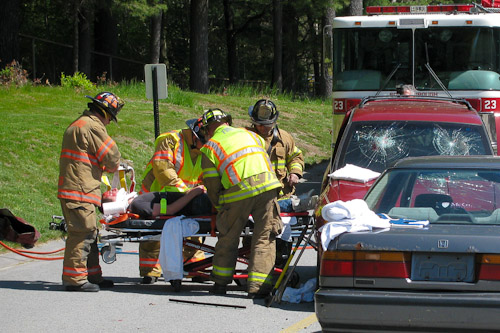 The aftermath of a car crash involving nine teenagers played out in the Algonquin parking lot last week, and while the blood was fake, the drama was real.

Algonquin’s SADD chapter along with police and fire from Southborough and Northborough, and state police, put on a mock car crash at the high school last Friday. It was part of a series of presentations at Algonquin on destructive decisions like drinking and driving and texting while driving.

The car crash may have been fake, but it echoed real life tragedy. While the youngest students at Algonquin were still in elementary school when it happened, the death of Southborough sisters Shauna and Meghan Murphy in a car accident in 2005 still resonates today.

“It is high school. People still make bad decisions. That’s the whole point of SADD: We’re trying to stop kids from making bad decisions,” Thomas S. Lewis, an 18-year-old Southborough senior and SADD member told the Worcester Telegram & Gazette. “It (the Murphy sisters’ deaths) happened five years ago and everyone in our class remembers and it strongly impacts us. I don’t want to see that happen to any of my friends, family, anyone in this school.”

The scenario played out by SADD members and emergency personnel was this. Four teens were in one car. The driver was drunk. The car smashed into an oncoming car carrying five other teens. A passenger in one of the cars died.

The smashed up cars used in the demonstration were provided by Michael Aspesi and Ted’s Towing of Southborough.

Southborough Fire Chief John Mauro, Jr. participated in the mock car crash and sent along some photos. Click any image in the gallery to enlarge and view as a slideshow.