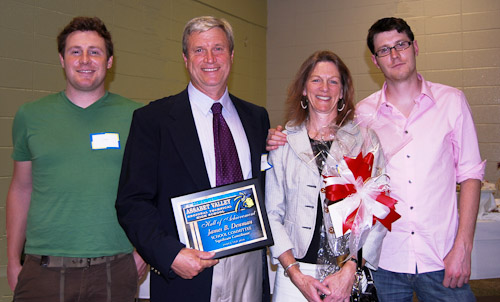 When he passed away last month at the age of 89, Southborough resident Jim Denman was in his 29th year as a member of the Assabet School Committee. Last week Denman was posthumously inducted into Assabet’s newly-formed Hall of Achievement for his years of service.

Assabet Principal Mark Hollick said the Hall of Achievement recognizes “individuals who, through commitment, sacrifice, and dedication, have brought pride and distinction to the school, or who continue to distinguish themselves and bring honor to their organizations and community through exceptional achievements and/or service.”

Denman was awarded a Significant Contributor Award. The award was accepted by his son James Denman.

It’s good to hear that Jim was honored. He was truly Assabet’s greatest booster. Rarely was there a Town Meeting when he didn’t find an opportunity to remind us of the asset that the school is both for our children and for the projects that the students do in our town, saving us thousands of dollars. The latest is all the work–from roofing and siding and electrical and plumbing–on the latest addition to our affordable housing (on Parkerville Road).
My older son, David, went to Assabet when he found out the school had a room full of computers. Especially because of the work-study program in his senior year, it has proven to be the foundation for a successful and remunerative working life for the last 25 years. And he still loves rooms full of computers.

He also served on the Planning Board and was a stalwart Democrat. Lesser-known fact: he and his wife, Lois, were faithful swimmers at the Sheraton Framingham which was a gift for me since I that is how I got to know them on more personally.

Our eldest son went to Assabet & it was the best thing he could have done. He graduated with a certificate in compuer aided drafting & has had a “leg up” as he has joined the work force. He has very close friends from his class there and has maintained ties with the school.

The Assabet staff is great, and the programs are terrific. Many kids do go on to good colleges from there but everyone who graduates is well-trained for their chosen field of work. We could not have been happier at the opportunities that Assabet provided our son and family.

The work that the school is donating at the house on Parkerville Road is helping to bring to life in a very cost-effective way the Town’s commitment to affordable housing and maintaining the viability of a home in Southborough that might otherwise have been demolished.

Jim was a wonderful steward of Southborough’s interest in AVRTHS — a valuable resource for everyone in the region!

Well said Mary. My son and youngst daughter both graduated from Assabet. Not only is it a great school, Jim made sure that Southborough was well represented. He will be sorely missed.