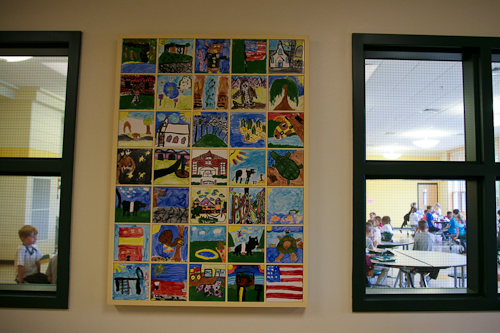 There’s some new art adorning the walls at Woodward Elementary School. Third-grader Ben Vroman says it looks “awesome.” Classmate Ryan Murphy says it’s “sweet.” But as two of the artists who helped created the pieces, they may be just a little bit biased.

Biased or not, they’re right.

Recently installed in the rotunda at Woodward are ten wooden panels each housing 35 six-by-six inch ceramic tiles. The tiles were painted by last year’s second and third graders with scenes of Southborough. There are tiles with flowers and trees, stone walls, owls (the Woodward mascot), the island in the middle of the Sudbury Reservoir, a couple with renditions of the Southborough House of Pizza, and there are cows — lots of cows.

“This is a great permanent addition to the school,” Principal James Randell said. “It’s a lasting touch for these kids and the school they’ve been in.”

The artwork may have been created by the students, but it all came together thanks to the hard work of parents and teachers. The project, titled “The Nature of Southborough,” was the brainchild of the Woodward School Council, a parent-run organization.

“We wanted to develop something that represents how cool Southborough is, how beautiful and unique a town this is,” council member Erin Wheatley said. “The teachers were very supportive of the idea.”

Wheatley applied for a grant from the Massachusetts Cultural Council to cover the cost of the supplies. Nearly 400 tiles were painted at Woodward, then moved to the Arts Center where they were clear glazed and fired in the center’s kiln. Then all the tiles were moved to Wheatley’s house where her husband Paul Murphy constructed the frames and mounted each tile.

“All that moving around and not one tile got broken,” Arts Center Director Emily Van Nort said.

The tiles now hang permanently in the Woodward lobby. Wheatley, who is also chair of the Southborough Arts Council, said she is “beyond ecstatic” with the way they came out. Judging from their reactions, so are the students.

The Woodward School Council will host an open house to show off the tiles on Wednesday, June 9, from 4:00 to 6:00 pm. All are welcome to attend.

In the meantime, I took some photos of the artwork so you can get a sneak peek. Click any of the thumbnails in the gallery to enlarge and view as a slideshow.

Sean Murphy showing off his tile, the self-described "turkey with really big feet."

Ryan Murphy and Ben Vroman check out some tiles

Hi Susan,
Thank you for taking the time to visit Woodward to take photos and capture the details of a great project. This is an example of many different groups, Woodward School Council led by Principal Jim Randell, Southborough Arts Center, Mass Local Cultural Council Program, Southborough Senior Center, our Woodward Art teachers and students and some additional residents all coming together with spectacular results. The Nature of Southborough tiles are a vibrant visual of the beauty of our town as seen through the community of our children. I am so happy to have been part of the project and I hope that all the residents of Southborough take a few minutes to stop by the reception on June 9th to view these tiles. Everyone needs a little Art in their lives!!!!