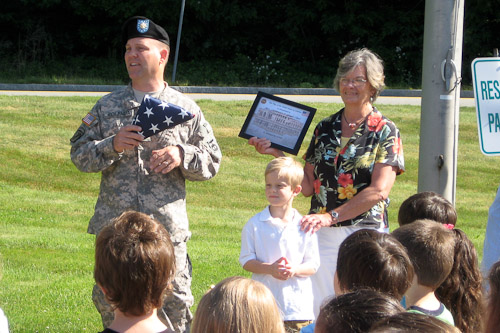 A special flag flew over Finn this weekend, one that came all the way from Baghdad.

Last year Southborough resident and Army major Daniel Kolenda served a tour of duty in Iraq. At the time, Kolenda’s daughter was a first-grader at Finn. In thanks for all the cards and gifts the students at Finn sent him during his tour, Kolenda sent the school an American flag that had flown over the US headquarters in Baghdad.

Last Friday, Kolenda — who returned from his tour of duty last summer — visited Finn to help raise the flag over the school in a special Memorial Day observance.

“This is the first time the flag has been flown since we received it,” Finn principal Mary Ryan said.

Kolenda’s daughter has moved on to Woodward, but his son is now in kindergarten at Finn and participated in the ceremony with his father.

Ryan said Kolenda would be back at the school today for a flag folding ceremony. The folded flag will remain on display at Finn.