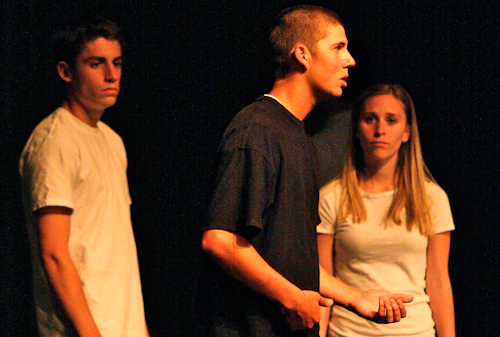 Above: A scene from Algonquin’s production of Bang Bang You’re Dead (photo by Margaret Doyle)

The one act play focuses on school violence and its causes. According to Mastrosimone, it “is a drama to be performed by kids, for kids.” The plot focuses on Josh, a high school student who murders his parents and five classmates. It is strongly based on the events surrounding Kip Kinkel’s shootings of his parents on May 20, 1998 and 27 of his classmates at Thurston High School in Springfield, Oregon on May 21, 1998.

Two weeks before the shooting deaths of 13 students at Columbine High School, Thurston High School staged a play in hopes of ‘doing something’ after the shootings at their own school.

The dramatist penned the play after his own son came home with a note from his school’s Principal alerting parents of a threat written on a bathroom wall.  The play has been performed over 15,000 times.  Its simple aim is to “inspire dialogue.”

Click any of the thumbnails in the gallery below to enlarge and view as a slideshow. Thanks to Margaret for sending in the photos.