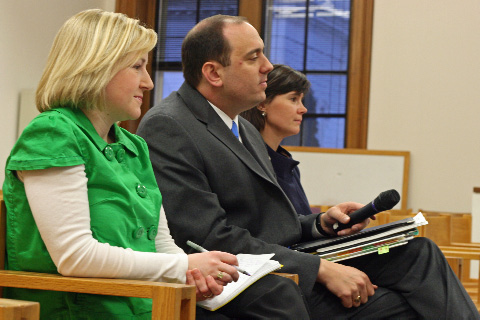 All three of Southborough’s state legislators are up for reelection this year, and all three will face challengers in their respective races.

Representing the 4th Middlesex district, which includes Southborough Precinct 1 along with Marlborough and Berlin, Democrat incumbent Danielle Gregoire will face off against Republican Steven L. Levy. Levy previously ran for a seat in the state senate in 2008. He lost to Democrat Jamie Eldridge, but he was a popular candidate in our town, taking 53% of the Southborough vote compared to Eldridge’s 47%.

Democrat Carolyn Dykema will seek reelection in the 8th Middlesex, which covers Southborough Precincts 2 and 3, along with Holliston, Hopkinton, Medway, and Westborough. She’ll be up against Jonathan Loya, a true political newcomer. Loya is a 19-year-old college student from Holliston who is running as an independent.

In the state senate, Democrat Jamie Eldridge will run for reelection in the Middlesex and Worcester district which includes all of Southborough, along with surrounding towns. Eldridge faces a challenge from Republican George M. Thompson who currently serves as a selectman in Westborough.

“Mr. Eldridge, a one-term senator and former representative, is a supporter of union workers, universal health care in a “Medicare for all” system and increasing the income tax to fund local and state services. He has worked on ethics reform and campaign finance reform.”
http://www.telegram.com/article/20100602/NEWS/6020395/-1/NEWS04

His site says:
Jamie believes that establishing true universal health care in Massachusetts and across the country is not only a health issue, but an economic one, too. Massachusetts businesses, especially small businesses, would reduce their costs and improve their ability to innovate by not having to worry about providing health insurance to their workers. Employees would become more productive by getting the care they need in order avoid lengthy absences from work, and would be more entrepreneurial by not staying at an unsatisfactory job because they’re just trying to hold onto their health insurance. Finally, it is important to emphasize that towns and cities, as the employer of thousands of public employees, would save costs and become more efficient under universal health care, instead of facing protracted battles when negotiating health care benefits every few years.

As for increasing taxes, the site actually says:
A fair tax system asks citizens to contribute to the cost of government services based on their ability to pay. Jamie understands that when we are considering ways of raising revenue, we should strive for fairness and avoid regressive taxes that would hurt low-to-moderate income families the most. He is a strong supporter of establishing a progressive income tax in Massachusetts, which would help balance out other, more regressive taxes (such as sales and property taxes) and make our tax system fairer overall.

I couldn’t find a web site for Mr. Thompson yet. I’m sure he’ll have one.

In any case, let’s hope there’s a healthy debate between the two candidates.