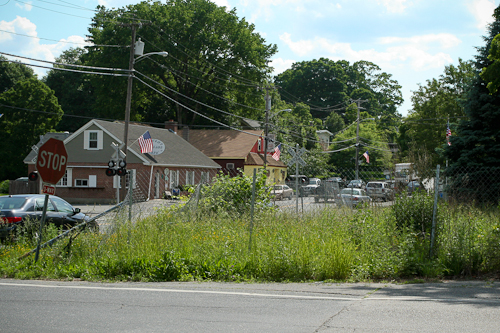 It’s overgrown with weeds. The fence is falling in. And now the Planning Board has asked the owner of a vacant lot at the corner of Main Street and Newton Street to clean it up.

Southborough businessman Peter Bemis, who purchased the lot 2005, was before the Planning Board earlier this month on a separate matter. “We told him in a letter that we might also ask him about the lot,” Planning Board Chairman Charles Gaffney said last night.

Gaffney said the board asked Bemis to mow the lot and fix the fence. “He said he’d look into it,” Planning Board member Donald Morris said.

That was two weeks ago. As of last night’s Planning Board meeting, no action had been taken on the lot, so the Planning Board said they would send a letter to Bemis asking him again to clean it up.

Gaffney said that since the lot is private property, there is nothing to compel Bemis to comply with the board’s request.

There’s no way to lease that land to the town for $1 per year as an open space, if the town provides landscaping, until the owner finds a use?

The remaining issue would be liability and insurance, which I suspect wouldn’t cost that much.

Yeah, it is an eyesore but it is private property and within very broad limits the owner is entitled to do or not do as he wishes.

I am not in favor of having the town spend public monies on this lot to mow, landscape or make it look nice. We have cut programs for youth at risk and will be laying off teachers. We have far more important uses of our scarce public money than interfering with a private landowners decisions about how to maintain their property.

If a $1 lease was a possibility in any way – how much would it cost to landscape it? Maybe a Sboro landscaping company like Jay’s would do it at a reduced cost in exchange for a posted sign saying they did it for the town? Who knows…I’m just saying…let’s get little wins for the town where we can if it’s inexpensive and can have a positive impact.

Look at the 10’s of thousands of dollars we spent on the triangle near the RR station to landscape an eyesore. A $1 lease is the thin edge of a very expensive wedge.

Why do we need government involvement at all. Why not organize a group of neighbors and others who care and offer the owner $1 for the right to do a little landscaping and mow 2 or 3 times per year with the understanding that the lease could be revoked at any time. A little grass seed and some wildflowers (native of course) would be a very inexpensive improvement. I would be happy to help. If a local business wanted to underwrite the effort a small sign would not be out of order. I would think this would be a win for the owner as well.

Government does not have to be the answer to all our problems.

That would make far too much sense.

So what individual(s) can enforce the cleaning up of this lot?

Love @dean dairy’s idea. Put in some picnic benches and there’s a nice spot to bring SHOPizza or ice cream from Mauro’s over to eat and hang out. I bet Sboro Medical employees would also love it.

Unforutnately, property owners are usually reluctant to “temporarily loan” a piece of real estate to a municipality. It sounds like a good idea at first but then, in the future, when the owner wants to sell or develop the parcel, there is an uprising because residents feel they are losing “their” park, or garden, or whatever. In short order they forget that it was only a temporary deal.

There is nothing we can do until the town gets something on the books about property up keep that can be endorsed with fine after fine until the problem is fixed. Look for how long Southborough Medical was an eyesore. Now they are building & tearing up the wet area in the back. No one even cares or we just don’t have the resources to care. Not sure which. Perhaps we look the other way for certain business owners. Or is it in certain neighborhoods?

I wonder if the people who approve of St. Marks unwowed eyesore want the vacant lot downtown mowed? Maybe the owner is using the same logic as St. Marks.

Maybe local boy scouts and/or girl scouts and/or little leaguers and/or kinder-groupers, etc would/could clean it up or maintain it and sell lemonade, cookies, raffles etc there. A poor town’s uhlmans…

Although the space is an eyesore, the economy cant be doing anything but hurting the owners intentions of the space. Sure, he could build something, he could clean it up, but its private property. I dont see how this space is different from St. Marks not mowing their lawns and letting their grass grow about 5 inches tall. This is one citizen of southborough, one person, not a whole school like St. Marks.

If the corner lot was really a meadow, that wouldn’t be a problem. The sidewalks are a mess and parking/walking on that side isn’t safe. The fence is falling over and it is very unclear where the property line is.

There are many families pushing strollers back and forth from Southborough Village Preschool or walking up to the library that can speak to that. Or people walking their dogs from East Main Street that deal with that stretch of road every day… On another side note, when the road signs were upgraded Newton Street got skipped. Ever notice the short squatty street sign in front of the bank? (the one that is rusted w/ yellow peeling paint)

I realize the town can’t do much about the private property, but isn’t the road and sidewalk under their control – at least in part?

The problem is he can’t do anything with the property anyway. There are septic issues with regard to the size of the lot. I’m pretty sure he bought the lot with certain intentions and then found out he has huge limitations. So it sits there. If he would just mow the grass and keep the fence repaired throughout the year it would be at least an effort. It’s one of my biggest pet peeves of the town. That and the stupid peeling street signs that we spend a fortune on!!!

Frankly, it’s just lazy of the owner, and it’s a little embarrassing to drive by it every day. It ruins the atmosphere of our otherwise quaint town.

So it is OK for ST M to “save the planet”, “reduce their carbon footprint” and let their property assume pasture land status in the center of town BUT we must direct a private citizen how to keep his property. Aren’t the “greenies” worried about the energy consumption that would result from the clean up efforts? Let’s be consistent. Beauty, or lack there of, is in the eye of the beholder. I think St M looks awful, and it is there right to have it that way. Ditto for the vacant lot.

Please do not compare the two lots……..it is ridiculous to think they
look similar. This guy is not reducing his carbon footprint and is not
assuming pasture land status. It’s simply negligence.

He could cut it down with a machete and fix the fence with hand tools. No carbon foot print, problem solved.
Meadows are pleasing. Chain link fences are not. That is my opinion.

Evidently you haven’t seen the vacant lot in question. Otherwise, you wouldn’t possibly make such a comparison, would you? Let me paint a picture: the vacant lot looks exactly how you would picture a vacant lot — ripped up falling down chain link fence, filled with trash and weeds and broken bottles and rusty cans and broken up chunks of asphalt. When the amber waves of grain at St. Marks looks like what I have just described, we can consistently compare apples to apples.

ABUTTERS SHOULD PUT UP SIGNS SAYING THAT PETER BEMIS OWNS THE LOT.

THE SIGNS WOULD BE GREAT ADVERTISING FOR HIS COMPANY

THE TOWN SHOULD DO NOTHING.

The St Mark’s land is being mowed near the sidewalks and edges, making it obvious that they are not mowing the interior… the rest is being taken care of. The land on the corner of Newton and Main has an ugly fence in need of repair, and is obviously neglected. Doesn’t really compare.

Isn’t this the property that the former owner tried to get the town to buy for $250K? And probably still has underground gas tanks from the former gas station? Fine if he can’t afford to upgrade the property, but he should be made to fix the fence at least… it’s in the downtown area for crying out loud! Step up to the plate landowner, and clean it up – or at least remove the awful fence and mow the lawn, oops, weeds once in a while.

Owning property comes with a social obligation to be a good neighbor.Letting a home or business property fall into disrepair and become a detriment to the surrounding property is not acceptable. At the very least every owner can keep their property neat and clean.That isn’t going to break anyones budget!

I noticed this afternoon on my walk, the lot was mowed & the fence has bee fixed. I still think I would be a nice place for a couple park benches.