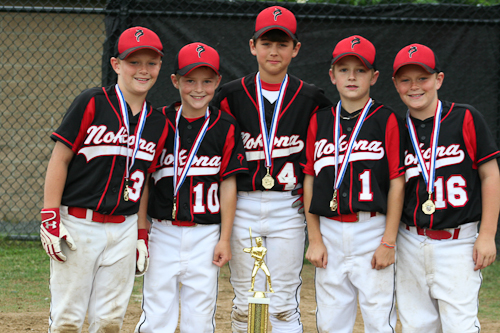 A My Southborough reader shares the details:

The top 16 teams from 4 states qualified to take part in the NEAAU Championship tournament. Nokona qualified by going 27-4 overall and 10-0 in divisional play during the regular season. The Nokona 10u team went 6-0 during the tournament to capture the Championship and finish with a phenomenal 33-4 overall record.  The Southboro boys were an integral part of the team this year.  Over the weekend, Ryan and Drew Courtwright contributed with strong defense and key hitting each game.  Kyle Henderson pitched and won the first game of the weekend and played solid defense throughout.  Alex Pappas was one of the team’s hottest hitters with a .600 + batting average, while playing strong defense too.  Zach Zides set the table for the team all weekend as the leadoff batter with a .700 + on base percentage.  Zach also pitched very well all weekend, started the championship game and got the win.

Congratulations to all team members on a great 2010 season!  For more info & team stats, check out:  http://www.neaau.org/BaseballStatistics.aspx?aid=11