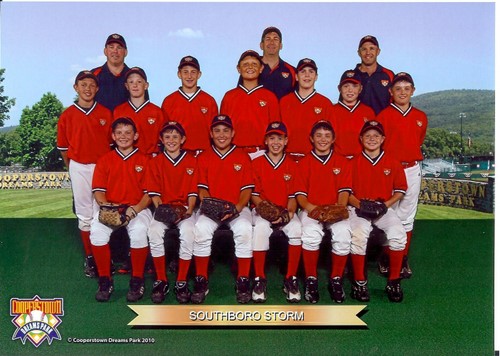 It’s already been a busy summer for the Southborough Storm youth baseball team. Last week they competed in a national tournament at Cooperstown, and this week they continue their drive toward the district title with a game tomorrow night at Mooney Field.

A MySouthborough reader sent in this write-up of the season so far (thanks, Katarina!).

The Southborough Storm competed at the Cooperstown Dreams Park tournament in Cooperstown, NY with 104 other teams from across the country.

The 12 year old team finished the three day qualification round with a record of 4 wins and 2 losses including dramatic come from behind wins over the 23rd and 24th ranked teams with last at bat game winning home runs from David Wrin. Winning pitchers for the Storm were Matt Trehub, Andrew Warfield, Luke Worthington and Jack Harlan

In an interesting twist of events the District league playoff start date was changed and the Storm played 2 games in Cooperstown on Tuesday morning before driving 4 hours to Grafton for their District playoff game that same night! The Southborough 12 year olds won the Grafton game 10 – 0 and then drove back to Cooperstown on Wednesday morning for a 3rd round, 3:00PM single elimination playoff game.

A tough BL Bombers squad from Alabama knocked the Storm out of the Cooperstown tournament but the team returned to Southborough for a Thursday night District league game in Oxford in which the team delivered another stirring comeback win in their last at bat when Nolan Kessinger hit a 3 run homer to tie the game which turned into a victory when Matt Trehub scored from first base on a deep single by Jack Harlan. Earlier in the game Andrew Warfield (the winning pitcher) started the comeback bid for the Southborough 12’s with a Grand Slam homer to get the team back in the game after falling behind 8 – 1.

The Southborough 12’s continue their drive for a 3rd district championship with a home game at Mooney field on Tuesday night, July 6 at 5:30PM followed by a game on Thursday night in Webster before the single elimination tournament starts on Monday, July 12.

Tomorrow night’s game is the team’s only home game this summer, so get out there and show your support!