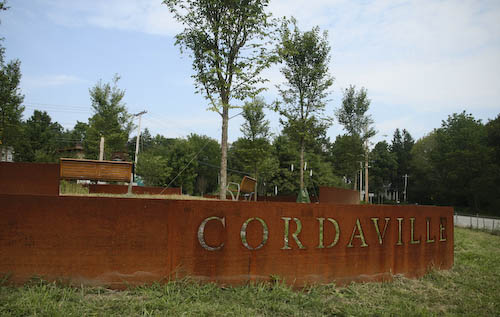 Several of you recently questioned how stone dust and other material purchased by taxpayers for the Triangle Park project ended up on the private property of a Triangle committee member last year. Committee Chair Nancy Vargas doesn’t dispute that materials from the project were moved to the neighbor’s yard, but she says the whole incident is a “misunderstanding.”

It’s a long story, and you can read all the details from Vargas herself, but here’s the short version.

An employee of the contractor working on the Triangle was supposed to haul away and dispose of a pile of “trash fill.” Instead, he approached the husband of a committee member, whose property abuts the park, and asked if he wanted to take it to save the hauling costs. “Thinking he was helping the project and the town, he said yes and left for work,” Vargas said. The worker then moved the fill, along with a small pile of stone dust, onto the man’s yard.

When the committee member — the resident’s wife — returned home from work and saw the material in her yard, she contacted the town to have it removed.

In the meantime, a complaint was lodged by another neighbor, prompting the police to investigate the incident. “There was no theft,” Selectwoman Bonnie Phaneuf said this week. “It was thoroughly investigated by the police department.”

Vargas acknowledged that moving the material to the neighbor’s yard was a mistake, but said all parties were trying to save the town money by not having to remove and dispose of the material.

“It is irrational to suppose that these people (the committee member and her husband) have sacrificed continuously over the past eight years in order to ‘steal’ less than $75 worth of building materials at the end of the project,” Vargas said. “Our police department has done all they can to investigate the matter thoroughly and no wrongdoing was found. That should have been the end of it – last year.”

For the Real Story from the source of the accusation, please go to “Recent Comments”, Megan Dodge’s post of Sept. 3– a letter to the Selectmen. I encourage townspeople to stand up for what’s right….See something, say something!!!

As I said earlier, I observed the fishy goings-on at the Triangle, too. I agree with “Southie.” I read the letter to the selectmen twice, and it seems credible. Looks to me like Ms. Vargas is chasing charges, and seems to give new excuses every time she comes on. Not very professional, in my opinion. She’s blaming everyone but herself for being Chairman of a poorly managed Triangle project and allowing any stuff to go to a committee member. She should apologize, resign, and get that other committee member away from that group for the rest of the triangle work. If she doesn’t do that, the selectmen should force it. Otherwise, it looks like this stuff is ok with them.

Unlike Nancy, you won’t put your name in front of the public, much less your efforts, so pardon me if I don’t find you credible. You choose to believe charges that were investigated and found not to be culpable. If you’re ever on a jury, an innocent defendant will have to rely on the other 11 jurors for fairness.

I’m with you on you statement Kelly.

Ms. Vargas is misleading all of us that it was only a young man who just made a “mistake” by delivering material to the committee member’s property. In a letter dated Nov. 17, 2009, to the BOS by Jean Kitchen, it says there had been prior deliveries of material approved by “Shawn, one of the site managers”……The material went to that committee member’s yard, and some of it was specifically used to back up the committee member’s wall. How does Ms. Vargas explain the “mistake” of these other deliveries? She does now finally admit there was monetary value to some of the material, although I don’t know where she gets the figure of only less than $75.00 for delivery, use of trucks, employees, and material of any kind. And now that we know Ms. Vargas allowed material to go to the committee member, at what dollar figure does Ms. Vargas think it becomes a theft?
Ms. Vargas also ignores the vandalism with intent to injure to my source’s property that occurred just a couple days after he reported that a committee member was taking advantage of the Triangle Project. (This was the reason that the situation became a police matter.) Does Ms. Vargas not think that just maybe the responsible committee member might have done this vandalism, or is it just an isolated coincidence?
Ms. Vargas gives her “personal opinion” in the latter part of her letter, so I’d like to give mine. I think it is arrogant of her to say this is the “last time she’ll speak on the subject”. Townspeople may have questions, as I do, and public figures are not above reproach. She permitted this to go on at the triangle, and is covering up much more than $75.00 of material that went to the committee member.
Ms. Vargas and Ms. Phaneuf keep saying there was a “thorough investigation” by police. I can tell you in detail how “thorough” that police report was, but it would be very troubling to the townspeople. A lot of information went to the BOS about how unsettling that report was. If people are interested in details of the official police report and the multitude of errors and omissions that were made, I can provide some of the documents that my source sent to the Selectmen. I will say at this point no dollar figure value (like the “less than $75” that Ms. Vargas notes) is mentioned in the police report, and that alone may be a game changer.
All of this has been given to me by my source, who hasn’t provided his name for fear of further reprisal, intimidation, and vandalism with intent to injure.
The integrity of the triangle committee has been compromised. I think it’s time for Ms. Vargas and the committee member whose property has been enhanced on our dollar, to resign from the Triangle project.

Does anybody know of this Megan Dodge. As far as I have found there is no one that lives in this town by that name. It sounds to me like someone who has too much time on their hands, someone who just likes to cause a stir! Get a life Megan Dodge and while you are at it why don’t you actually stop being a coward and post under your real name. For all we know your name could be Sue or Oliver Stone…

…Or she could be her own “source,” if you know what I mean…

I drive by this triangle most every day and I would like to thank whoever is responsible for transforming this one time vacant lot eyesore into a pretty cool looking park. It is a shame to read the comments posted by Megan Dodge. Clearly she, or he, or both, think that some kind of Watergate cover-up must be going on here. Or could it be they are just angry with the loss of a spot to curb their Golden Retriever. Or, by the tone of their post maybe just angry….

Whoa- try not to attack the messenger. Megan seems to have her ducks in a row. Somebody needs to look at this committee skimmer again, now that we know there was some value to what he took from the triangle. The definition of a volunteer is “a person who performs a service willingly and without compensation”. Amen. This committee member should ‘fess up, because he’s throwing the rest of the volunteers under the bus. Man-up! Don’t hide behind the other volunteers.

Yes, it’d make my day to hear from the Triangle Taker, too, but I’m sure he’s cowering behind the women. Sounds like he was AWOL from the police for a long time, too. I’m really disgusted that he was working on his yard on my dime! But I guess I deserve it, because like I said before, I saw stuff and didn’t come forward. Sounds like there was more than one delivery, too, and why hasn’t that Vargas person denied that? Throws doubt on the rest of the stuff she said here. The Triangle Taker was able to pull the wool over town officials’ eyes, but thank goodness at least one person was paying attention and exposed it.
As for the lone wolf who said the park was “cool”, what’s he been smoking? From most of the opinions on this blog, he’ll be the “cheese standing alone” in that regard.

I’m thinking that the Emporer, John P, Megan, and Bentley, Mikeonthepike…. are one in the same…..someone with Multiple Personality Disorder.