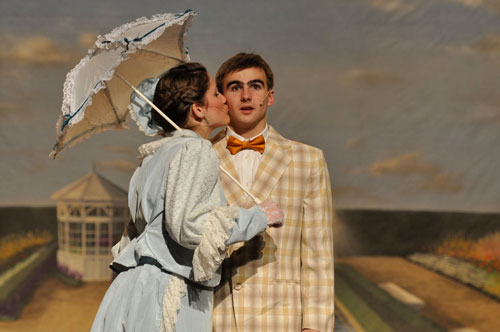 The musical Where’s Charley? — described as a madcap adventure of comedy, romance and mistaken identities — opens at Algonquin on Thursday night. There are also performances on Friday and Saturday night. Here are the details.

Based on Brandon Thomas’ play “Charley’s Aunt”, musical theater masters George Abbot and Frank Loesser adapted one of the most popular and successful farces ever written and turned it a tuneful and hysterically funny classic that’s non-stop entertainment.

Oxford University students Charley (Steph Bacon) and Jack (Zach Lusk) invite the young and winsome Kitty (Marisa Vazquez) and Amy (Juliana Fiore) to lunch under the chaperoning eye of Donna Lucia, Charlie’s wealthy aunt (it is, after all, 1892). But when Donna Lucia doesn’t show, a desperate Charlie disguises himself as his aunt so the young ladies can visit, unaware they’ve brought a chaperone of their own: Amy’s stuffy uncle (Alex LaFreniere) , who promptly falls for Charlie’s aunt-like charms! Then the real aunt shows up, (Sarah Gittins) and
it’s all downhill from there: quick changes, fast talking, marriage proposals, compromising situations and rowdy hilarity.

Performances are this Thursday, Friday and Saturday at 7:00pm at Algonquin Regional High School. Tickets are $10.00.

I am very happy and impressed that our students in the arts continue to choose upstanding and decent arts programs and plays. There are many other bad choices our kids and teachers could make but they are choosing to take the high road in play production. Looking forward to seeing the performance.

I am curious about what you would consider “not upstanding” or “indecent.” I, for one, also appreciate theatrical productions which attempt to challenge and educate as well as those which simply entertain. Highschool students are on the verge of adulthood and should be expanding their minds, especially in arts programs.

For example, Framingham Highschool is putting on a production of “The Laramie Project” on Friday evening. The hateful “Westboro Baptist Church” is coming all the way from Kansas (not to be confused with Westboro, MA) to stage a protest of the production. Their Westboro Baptist Church web site, http://www.godhatesfags.com can tell you all you need to know about this lunatic group posing as a church. Many local residents will be attending to counter the protest and support the production. Here is an article about it:

As I have already stated, I feel there is room for both types of productions in our community and it is good that we seem to have both happening this week. I wish both high schools much success!

Should be a wonderful show! These kids have put in hours and hours to make this a production to look forward to! There is certainly much talent at ARHS, including singing, acting, pit orchestra, directing, choreographing, etc. etc.!

Upstanding – Decent. Good morally sound decisions are made by good morally sound people. Parents in NS will not stand for garbage being portrayed at their schools using their hard earned dollars at the great schools we have. (PS – we receive very little federal and state money as compared to Framinghma who receives quite literally a boat load) Framingham is Framingham and NS is NS. I choose NS not Framingham for those reasons. Most others do as well. Sounds like you have an agenda? Maybe chip on the shoulder. But you know, Good luck with that. BTW, and I really think this is a ligit question? Why dont people with such strong opines post their names. Seems kind of covert and cowardly almost doesnt it? Happy Hannukah and Merry Christmas to all. Smile and enjoy the season. And the play is fantastic kids and parents of NS! Thank you.

mike, first read your posts and then read mine. If one of us has an “agenda” or a “chip on his shoulder” it is certainly not I. I am saying that it is “all good.” I think you are saying that the production which Framingham High School put on is “garbage.” The great news is that, if that is what you are saying, you are part of a very small (albeit scary) minority.

I attended the Framingham High School production on Friday evening and it was fantastic! The production included the entire community, not just high school students and not just Framingham. It was acted by people of all ages – the eldest appeared to be in his 70’s! Parents and children participated together. It was completely sold out for both nights. The Westboro Baptist Church did show up on Friday morning – all FIVE of them (three of which were the leader’s children!). They were countered with a hundred counter protesters communicating the ,essage “Love is Louder.” On Saturday night the WBC didn’t bother coming back with their “God Hates Fags” message, but 400 counter protesters were there! The drama company was presented with State House and Senate citations. I am proud to be part of a community that so overwhelmingly supports love and tolerance instead of hate. You can read about it here:

I, and the people I was with, spoke to some of the kids from the high school. They said that they sent thank you notes to the WBC to thank them for raising awareness of the production. They also informed the WBC that all the money that they were raising will be forwarded to the exact organizations which the WBC vilifies on their web site. Great thinking kids!

As for my anonymity, I can hardly believe that there are people who hold opinions such as yours living in my town – I am certainly not about to give out my name on the world wide web so that I and my family might be targeted by the likes of the Westboro Baptist Church. Call me a coward, I call it prudent. The “anonymity” thing has been vetted to death on this blog. Anonymity has its place within a forum for free discourse on topics exactly like this one. It is a non-issue.

Wishing you the Happiest of Holidays as well.