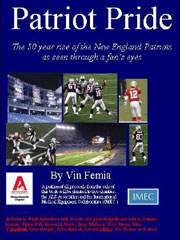 With tonight’s big matchup between the Patriots and the Jets, this event at the library tomorrow night could not be better timed. Relieve the (hopefully) glorious moments of tonight’s game, and hear about the 50-year rise of the New England Patriots with local author Vin Femia at the Southborough Library on Tuesday. You’ll be among fans!

Here are all the details:

The Southborough Public Library will host local author Vin Femia, who just published his second book, this one entitled, Patriot Pride: The 50 Year Rise of the New England Patriots as Seen Through a Fan’s Eyes

No team but the Patriot could move most New Englanders as they do: a unique, vagabond group of players until they settled in a little town in Massachusetts, a mediocre team for most of its first 40 years, until suddenly, in 2001, everything turned around. They’re one of New England’s sports dynasties, in the past decade winning three Super Bowls and narrowly missing a fourth.

This would be a great way to enjoy the football season this year on an evening when there’s no football on TV. Call the Southborough Public Library for more information or to register at 508.485.5031 for the December 7 exploration of Patriot Pride by Vincent Femia. Bring a friend or a fan!