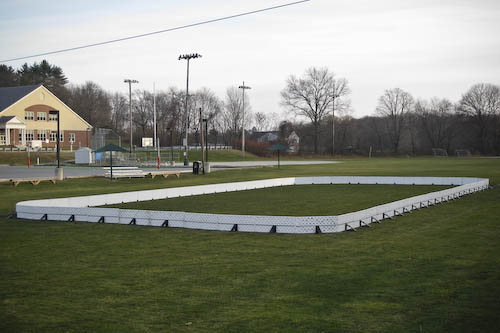 Above: The community ice rink under construction at Woodward

Southborough will have a community ice rink once again this winter, but this year it’s going to be in a new location. Instead of putting the rink in Fayville like last year, the town has decided instead to build it at Woodward.

Recreation Director Doreen Ferguson said they opted to move the rink to Woodward because there’s more parking, and with no stairs to navigate like at the park in Fayville, it’s easier to access.

The ice rink is being built over one of the soccer fields at Woodward, but Ferguson said it will be long gone before spring sports are scheduled to start.

Lights are slated to be installed on that section of the field at Woodward. Ferguson said she had hoped they would be there in time for the skating season, but due to other projects in town, the installation schedule was pushed back.

No word yet on when the rink will open, but I’ll pass along that info when I get it. Skaters, cross your fingers for a cold snap.

I remember skating there about a million years ago. I can’t begin to tell you how many freezing cold weekends every kid in Soutborough would end up on the ice infront of Woodward. What a great idea!

It was only half a million years ago. Cal Mauro always flooded the field for skating.

wondering w hat it was….thought it was a riding ring and was seriously waiting for dressage (did i even spell that correctly?)to be offered as a RAP but then a bit confused as we are indeed heading into the winter months and, well, dressage is, well, really fancy.

I just passed Woodward and the rink was being filled with water. Very exciting! The Recreation Department deserves many thanks for their constant flood of great ideas and successful projects.

Also, thanks to carrie alpert for this:

I almost spit tea all over my keyboard this morning! Nice to start the day with a good laugh.

The rink was purchased by the Friends of Recreation. DPW staff, Chris Leroy and several others assemble the rink. As for clearing it when it snows that is volunteer time by Brent and Doreen Ferguson (mostly Brent) and anyone else who wishes to donate their time.

Many thanks to them too!

and to think that i really did think the teeny tiny horses were coming….

We’re really looking forward to it. We got the kids skates at the winter sports swap last month because you can’t rent at the town rink! Our little backyard patch of ice is very small, so we’ll be out there at Woodward this winter.

Although, I would have loved to see the tiny horses.

As for clearing, will there be shovels at the rink, or should we bring some if it’s been snowing? The only other outdoor community rink I was on after a snow had a few lying around.

We do plan to put shovels out again. Any help would be greatly appreciated.

I know when I was growing up in PA and since we’ve been here in MA for the last 12 years, the ettiquitte regarding outdoor skating as far as I’ve always know it has been “if you want to skate, expect to pitch in on the shoveling, too.” It’s always annoying to be one of the ones shovelling when others come by and just start skating on the cleared areas without pitching in.

So, grab one of the shovels that are there if you’re one of the first ones there, bring one from home in the case of a larger snow accumulation that could use a few extra hands/shovels, and pitch in! The more who do so, the faster it gets done, the better the ice (fewer frozen lumps of snow remnants), and the more fun everyone has.

It’s part of putting the “community” in “community ice rink” ….

There is a school sign as you enter the parking lot that states “No public use during school hours during the school year”. Is there an exemption for the rink? I went by to skate at lunch and decided not to press my luck.

Kevin,
I have pondered that myself. Nothing against a little skating during the day but not too keen on the parking in the parking lot of the school and I prefer a little more separation of school and public gathering. I feel as though the only people that belong on school property during school hours are students, faculty, parent volunteers (we sign in, say hello and wear name tags) and other approved individuals who also sign in.

I have to admit I haven’t checked the Friends of Recreation webpage recently, but are there hours posted for things like open skating, kids stick/puck and/or adult stick/puck time?

It was nice last year to know when the windows for these types of things were, especially on the weekends.

The rink schedule is posted on the Rec. Department’s website. Here’s a link: http://southboroughrecreation.com/pdf/SPECIAL%20EVENTS/ICE%20RINK%20SCHEDULE.pdf.

Since there are lights, will there be any night hours that the rink is open?