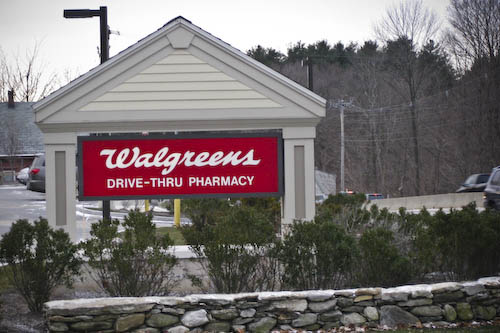 Above: The Walgreens in town will soon need to clear its shelves of cigarettes

Yesterday the Southborough Board of Health voted unanimously to ban the sale of tobacco products at pharmacies in town, becoming only the seventh municipality in the state to adopt such a regulation.

Of Southborough’s three pharmacies, only the Walgreens on Oak Hill Road and Route 9 currently sells cigarettes. They will have 60 days to comply with the new regulation. The ban includes the sale of cigarettes as well as smokeless tobacco.

Board of Health Chairman Louis Fazen said the proprietors of each of the town’s pharmacies were notified in writing of the proposed ban, but none responded with any comments. No representatives for either Walgreens or Eaton Apothecary — the two pharmacy chains in town — attended yesterday’s public hearing.

Fazen said one of his main objectives in supporting the ban was to limit the exposure kids have to cigarettes. “A pharmacy is an inappropriate way to expose youth to the sale of cigarettes, to make them think that it’s part of a healthy lifestyle,” he said.

Donald J. Wilson, director of the Massachusetts Municipal Tobacco Control Technical Assistance Program, was at yesterday’s meeting. He told board members that for those in the process of quitting smoking, simply seeing cigarettes for sale can cause a relapse. “A pharmacy is where they go to buy the patch or other tools to quit smoking, and then they see a wall of Marlboro’s.”

In the comments yesterday, several of you pointed out that in addition to tobacco products, pharmacies like Walgreens sell a variety of other consumables that are considered unhealthy. Wilson said cigarettes differ from products like Doritos and Pepsi because, “when used as directed, (cigarettes) kill.”

“Combating smoking is a winnable problem,” Fazen said. “It makes sense for us to do what we can.”

Update: For those of you who are curious about what your neighbors think of this decision, the discussion is happening over in this post.

Good job Board of Health. You made the right decisions for the kids in this town.

Both of my parents were smokers. Both died of cancer. I have been very much in favor of public education about the dangers of smoking. However, I think the political class has really been piling on the smokers in the form of heavy taxes and other rules. If a young person wants to smoke, stopping them from buying cigarettes at Walgreens will just send them someplace else. For older people who are already hooked, this is just one more beat down that is hard to justify.

To me , this smacks of political correctness and not much common sense.

I do not smoke, never have, and I think it is the height of lunacy that our federal government still subsidies tobacco growers in the US.

If the Board of Health is truly serious about reducing the dangers associated with smoking, then tobacco sales should be outlawed in all retail outlets in Southborough. And if they are really serious, they should also ban the sale of “wrapping papers” used to roll marijuana cigarettes. That would be politically un-correct and will never happen but what is the difference between smoking a Marlboro and a marijuana cigarette? Both cause terrible smoke damage to your body.

Mike; I wouldn’t put marijuana in the same category as tobacco. There is no corporate structure targeting children for marijuana usage (except maybe on the California beaches; that’s another story), and in my opinion marijuana is not addictive. It’s a bad, expensive habit that leaves people with a lot less cash. Fortunately most people quit by their early 20’s without a problem.

Most marijuana users quit at any early age, and the drug has no harmful effect later in life. Nicotine, however, is one of the most highly addictive poisons known and it’s very difficult to give it up.

A new angle on the stop smoking campaign is needed every six months or so to justify keeping the money following to agencies like the Massachusetts Municipal Tobacco Control Technical Assistance Program.

See our website for more information on the issue of this important public health issue. Can you imaging your doctor or hospital selling you cigarettes?