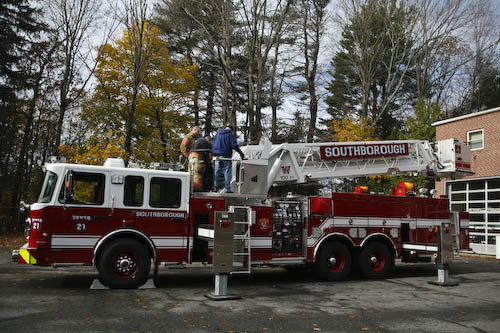 You’ve probably seen Tower 21 — the newest addition to Southborough’s fire-fighting fleet — cruising around town over the past few weeks. Most of those drives have been training exercises as the crew gets used to the new apparatus.

But Fire Chief John Mauro Jr. tells me that as of 3:00 pm yesterday, the truck officially went into service. It’s the culmination of a more than 3-year-long effort to bring the new ladder truck to town. Here’s a recap of the timeline.

September 2008 — Ladder truck committee presents its report to the Board of Selectmen and recommends the purchase of combination ladder-pumper truck called a quint.

September 29, 2009 — Voters at a special fall town meeting approve the purchase of a new ladder truck at the cost of $852K, to be funded through money from the town’s stabilization fund, loans, and private donations.

October 11, 2010 — Tower 21 makes its debut in the Heritage Day parade. The town officially takes possession of the truck a few days later and begins two months of training on the apparatus.