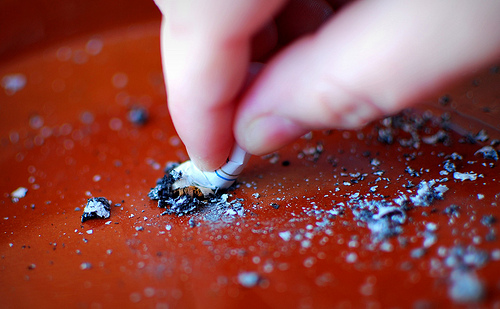 It wasn’t on the agenda at last night’s Board of Selectmen meeting, but before things got underway I had a chance to ask the selectmen what they thought of the Board of Health’s recent decision to ban tobacco sales in Southborough pharmacies.

They may not agree with the new regulations, but there’s not much the selectmen can do about them. Regulating the sale of tobacco falls squarely within the jurisdiction of the Board of Health. As a board, the selectmen have no say in the decision.

In reference to the Selectmen’s reaction to the Board of Health’s decision to ban tobacco sales at pharmacies, the Board of Health is to be applauded for their concern about the staggering number of 440,000 premature deaths each year in the U.S. caused by smoking. I believe, however, that their regulation is misdirected and lends easily to a watershed of regulatory mandates. The slippery slope statement assigned accurately to me by Ms. Fitzgerald, relates not to the possibility of additional bans on innocuous pharmacy products, but rather reflects a concern for the potential endless regulation of individual conduct and freedoms as witnessed in California and elsewhere.

First, I disagree with the basic premise underlying the regulation. According to the regulation, pharmacies are targeted because “the sale of tobacco products is incompatible with the mission of health care institutions…”

The Board of Health’s position effectively boils down to the claim that consumers will likely believe that anything a pharmacy sells must be healthy. This is a far cry from reality. Most consumers do not conceive of pharmacies, particularly chain pharmacies like Walgreen’s, as “healthcare institutions.”

As a matter of history and culture, the American pharmacy is inextricably linked to notions of “the drugstore”: that special combination of soda shop, prescription department and general emporium. However, today’s pharmacies most strongly resemble convenience stores, selling among other things, according to the U.S. Census Bureau, “cosmetics; toiletries; greeting cards; magazines; tobacco; and candy.” Lets face it, pharmacists gave up their role as primary medical practitioners long ago.

The regulation is further misdirected insofar as a “pharmacy” does not sell tobacco. In fact, in most Walgreen’s stores, the pharmacy is located in the back of the store; the pharmacist does not assist in the tobacco sales, which take place in the front of the store through a clerk; and, the pharmacy section constitutes but a small portion of the store. To premise a sales prohibition based solely on the presence of a pharmacy ignores the sale of tobacco products less than 100 yards away at the gas station. If the lofty objective is to reduce the sale of tobacco products which in turn would reduce the mortality rate, why is a retail establishment with a pharmacy treated differently than an establishment without a pharmacy? The lack of a rational relationship is the essence of an equal protection violation.

In reality, isn’t the regulation less about pharmaceutical ethics and more an effort to remove a legal and harmful product from public retailers? While there is universal agreement that a reduction in tobacco sales will correspondingly reduce the incidence of disease, the regulation cannot achieve that objective when tobacco sales are made within a stone’s throw of the pharmacy. Perhaps the Board of Health views pharmacies as simply the lowest hanging fruit, and through a specious and archaic definition of “health care institutions,” they were clouded with this easy picking.

The second, and perhaps more troubling, objection to the regulation relates to the potential slippery slope of an endless series of regulations. What do I mean?

Simply by way of illustration, in April of this year, the American Medical Association deemed “obesity as the greatest threat to public health today.” The toll that obesity takes on society is measured not only in terms of the deaths it causes, but also in terms of the quality of life for those living with the disease. According to the Surgeon General of the United States, approximately 300,000 deaths per year are associated with obesity-related health problems. In the past three decades, obesity rates for children have TRIPLED. Leading the caloric race in the causal effect is the relationship between obesity and the prevalence of fast food restaurants.

If obesity ventures into the cross-hairs of the Board of Health, a new ban would be consistent, and perhaps required, given the philosophy of the tobacco sales ban. And, thus, the slippery slope, the watershed of endless regulation.

Will our town follow the lead of Santa Clara, CA and ban “happy meal” toys which, supporters of the ban say, rewards kids for eating Wendy’s, McDonald’s, etc.? The ban would lessen the child’s incentive for fast food, which would help curb the increasingly growing rates of childhood obesity. Or will our town simply ban new fast food restaurants all together like south Los Angeles has done. Do we follow the 2006 lead of Manhattan and ban trans-fat in restaurants? Sugary beverages, such as soda, contribute to obesity, heart disease and type 2 diabetes. A strong public policy case exists for reducing the consumption of these beverages. And while we are at it, why stop at obesity? Next up, alcohol. Where is the end?

Bans on tobacco sales, fast food establishments and alcohol sales seek to achieve identical goals: the protection and health of our citizenry. There is no principle of law or logic that would preclude imposition of restrictions on fast food and alcohol similar to the ban on tobacco sales. IHowever, that big brother mentality forgets the concepts individuals hold dear, namely economic freedom and democratic choice.

In a variety of circumstances we have recognized that a necessary corollary of giving individuals freedom to choose how to conduct their lives is acceptance of the fact that different individuals will make different choices. The concept that liberty is more important than life itself is most noted in our American history and tradition. Adherence to the tradition of honoring individual choice is a reflection of our basic respect for humanity.

Granted, there are potent arguments in support of the claim that people’s freedom of choice is not absolute. However, even limited as it may be, that freedom has enormous personal and public value. We associate civil rights with people’s ability to control their lives and make social and political choices. The very concept of responsibility would lose sense if we took away people’s right to make their own mistakes and deal with the consequences. The fact that people’s choices may be imperfect does not mean that government regulation is more likely to make better choices for them.

The Board of Health’s objective no one disputes. Yet, I am wary of policies that attempt to influence free choice and consumption behavior. Government action aimed at influencing an individual’s personal choices cuts sharply against the notion of liberty and personal responsibility that pervades the United States. For citizens who highly value the concept of unadulterated free choice, banning sales of products legally available seems to be the quintessential step down the slippery slope of public policy making that will lead closer and closer to the feared “nanny state.”

On that note, Happy Holidays to all.

Mr. Rooney, I applaud you for taking the time to make your viewpoint known. I also agree 100% with what you have said. Many of our bravest Americans have died fighting for the freedoms that we enjoy today and while I can appreciate the sentiment behind what the Board of Health did, I don’t believe that they have the right to make decisions about what is best for me. I am an Adult, I go to work everyday and pay my taxes, I can decide what is best for me. For the record I am a prior smoker and believe it is a vile habit.

I wholeheartedly agree also that this is a very slippery slope that bear additional watching.

Thank you for your well thoughout post. I also agree with you 100%. I would hope the BOH would reconsider the decision they made. If they do not reverse the recent decision, as a tax payer/resident in the town of Southborough, what options do we have to replace the board members? I certainly do not want to have a “nanny state” (or nanny town) I have a serious problem with any board in the town that targets one particular business for selling something that is completely legal.

As a resident with kids, I am totally supportive of the BOH’s decision in this case. Cigarettes/nicotine are proven to be highly addictive and clearly lead to illness. Lots of other products that are known to be dangerous are also sold only in specific outlets (alcohol, firearms). I don’t see a slippery slope. I see common sense.

The new law does not ban all sales of cigarettes. You can still buy them in Southborough–just not in pharmacies.

I agree with the fact that cigarettes in pharmacies should be banned and that we all should contribute in taking more actions regarding stopping smoking for our own health and our kids health.