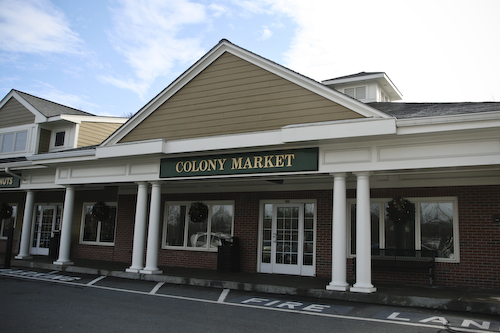 A couple of you emailed me asking about Colony Market next to Dunkin’ Donuts in the Town Center Plaza, which closed up shop sometime last week. I did some asking around, and here’s what I found out.

Anthony Carbone from Capital Group Properties, who owns the plaza, said Colony Market’s lease was up and the space was leased to a new proprietor. Carbone told me the new operator plans to open “a similar but more high-end store” that will feature beer, wine, and groceries.

Carbone said the space will be built out over the next month. No word on what the new business will be called.

yeah! Can’t wait for a fresher take our local market.

No offense to the previous owner,… but that place smelled all the time! I hope they clean the place up a a bit and offer quality groceries + meats and fresh veggies. I’m not looking for this to be Stop + Shop, BUT it would be great if I needed some food that we had a high quality market to go to (just don’t go and charge $25/lb for steak like another place in town does)

GREAT NEWS!!! We live near there but NEVER went in there! I can’t wait to see who goes in there!
Thanks for the update!

Ditto Lisa! I was wondering what happend. Only went there if dire emergency, which was pretty rare since Collella’s/Mauro’s ain’t too far. It’ll be interesting to see what happens.

I also only went in DIRE emergencies! It smelled so awful. What smelled so bad? I used to think it was the rotting lobsters but then they got rid of that and it still smelled! By the way – DJD66 – who in town sells steaks for $25/lb.? Not Mauro’s. Panzano? Never shop there so don’t know.

That would be Panzano

GREAT!! can’t wait to see what opens up!

My kids called it “Smelly Market”!

I never wish a small businessman ill, but the proprietor of Colony Market was the sourest, least friendly person I ever bumped into. Like others who’ve commented here, I avoided the place whenever possible. Being polite and personable costs nothing.

Fitzgeralds could use an upgrade too. There are jars and cans in that store covered with dust. The place needs a proper renovation, an upgraded look and some better products. It could be a gold mine now with the new park, the train station and the now-occupied commercial building across the street!

I hope the new business that goes in actually cleans the shelfs & dusts of the products they have. I had found expired food at Colony a couple times. I would only go in for a soda on a very rare occasion.

I agree, the place smelled funny, and just thought it was the lobster tank.

Papa Rosa-I fully agree with you, they were not a friendly bunch there. Being polite & personable goes a VERY long way!!

The people that had Colony market also have Fitzgeralds which explains the lack of cleanliness The only thing I would buy at the Colony was beer or lottery tickets. The most recent man behind the counter wasn’t too bad but the first guy was downright unfriendly and I think he cheated me once when I gave him what I thought was a lottery ticket worth a couple of bucks. He told me that it was not a winner and I just didn’t feel like getting into an argument over 2 dollars

0
Lisa (a different one than above)

This is so exciting — this plaza has so much potential, but this store was just horrendous. Same goes for Fitzy’s, maybe they will sell it? Hubby has so many great memories of Fitzy’s back in the 80s and it certainly has the best location.

Hmmm…as my mother used to say, if you’ve got nothing good to say, don’t say anything at all. I’m surprised at all of the nasty comments. Who would have thought it. In Southborough, no less…

Every time I purchased a 30-pack of Bud Light at Colony Market, I would stare at the pre-made ham salad sandwiches and wonder who actually bought them. I’d then pay the man, receive a grunt instead of a “thank you” and go home and take a shower. I’d then quickly drink 3-4 beers in an attempt to erase my memory of my visit to Colony Market.

It is so true that they were NEVER nice in there! Not a smile, not even a “thank you for purchasing our dusty products”. I also had to question the total almost every time I was forced to go there once I caught onto the fact that they were making up the pricing as they went along….

the buzz that i heard from the girls at the Salon (and they know all the biz) is that it is being renovated and is going to be the same type of store. I am thinking what would actually do well since a new yoga studio is set to go in is a juice bar/health food style light breakfast-lunch place. Stop in and mail your mail and grab a smoothie, chit chat with whomever is there–check out the local bulletin board–it’s a good day.

I went there about twice during its existence, didn’t like it, or Fitzgeralds… For in-town stores, I only go to Mauro’s, they have great meats, friendly people, and prices aren’t bad considering the convenience. I do miss the farm stand at Capasso’s though.