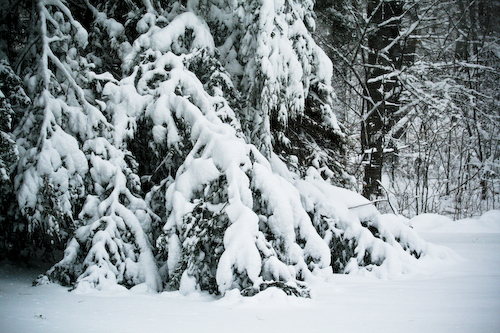 Above: Snow weighs down the branches of a pine tree

Flakes are still coming down in Southborough. As of about an hour ago, Fire Chief John Mauro Jr. said an estimated 10-12 inches was on the ground, thanks in large part to a burst of heavy snowfall just before dawn.

Mauro said most residents are heeding the advice to stay off the roads, which has allowed the DPW and Mass DOT to keep roadways open. More snow is expected throughout the morning, so Mauro said residents should continue to stay at home if possible.

“If you don’t have to travel, don’t,” Mauro wrote in an email. “The fewer cars on the road, the faster the clean-up can be completed.”

Strong winds are creating reduced visibility and white-out conditions in certain places like alongside open fields and over the causeways.

Mauro said extra public safety personnel are on duty to respond to any incidents, but so far things have been relatively quiet. The only fire call so far this morning was a fire alarm at Fay School.

I’ve been checking the National Grid Storm Center site throughout the morning, and have not seen any reports of power outages in Southborough or surrounding areas.

There are a number of closing and cancellations today due to the snow. You can see the latest list here.