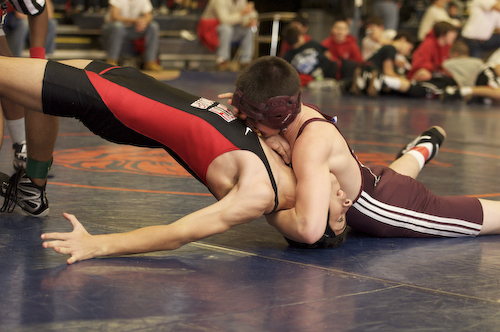 Above: Zach Teplansky moves on to final after pinning opponent (Photo by Sue Teplansky)

Wrestling mom Sue Teplansky sent in some gripping photos of a competition this weekend along with this write-up. Thanks, Sue!

On Sunday, January 16, freshmen from the Algonquin wrestling team attended a state tournament hosted by Brookline High School.  After the morning weigh-ins, the wrestlers were assigned brackets within their weight class.  Several schools were represented and winners advanced throughout the day culminating with final matches in each weight class.

Coach Adam Quitt was very pleased with how well the freshmen boys represented the Algonquin wrestling program.  “We sent seven boys to participate and every one of our matches was competitive,” said Coach Quitt. “In fact, five of the boys placed in their weight class.”

The Algonquin wrestling team hosts their next match against Hudson this afternoon, and will host their second annual Wresting Quad against West Springfield, Dedham and Lincoln Sudbury on Saturday. See this week’s sports schedule for more details.

Here are some photos from Sunday’s tournament. Click to enlarge.