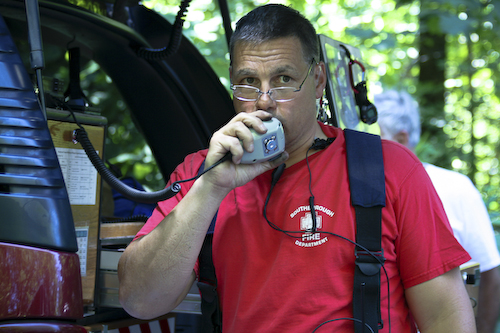 After 38 years with the Southborough Fire Department, Fire Chief John Mauro Jr. has announced his plans to retire in September.

Mauro drafted a letter to Selectmen earlier this month stating he intends to “resign my position as Fire Chief and Emergency Management Director, for the purpose of retirement, in September 2011.”

“Please understand this correspondence is not a formal letter of resignation. I am simply making my future intentions known in order to allow the board ample time to plan accordingly for my replacement,” he wrote.

Mauro started with the Fire Department as a call firefighter when he was 15 years old. “I remember riding my bike down to the old fire station that’s now the pizza place,” he said. “It’s been a wonderful and fulfilling career.”

The decision to retire was not an easy one, Mauro said, but the pressures of the job and the desire to spend more time with his family factored in. “With this job you’re always on call. The pager goes off at all times of the day and night.”

Mauro also said he has accomplished all the goals he set out when he became chief 11 years ago, including securing the purchase of a new ladder truck and elevating the level of ambulance service in Southborough.

“Before I became chief, we had to rely on paramedics from Marlborough Hospital,” Mauro said.

Mauro said he’s not sure what’s next. “I’m looking at all my possibilities,” he said. “I’m sure my family will be happy to see me some more.”

Very sad day, best wishes to the Chief. He is a wonderful man who has served our Community with dignity and grace. Thank you Chief for your service.

0
Hard to Fill his Boots

I’ve known John for many years and I know it is going to be extremely difficult for the town to fill his vacancy once he retires. But, first thing I noticed is that he as 38 years of service and started at 15. The math says he is 53 and thats short of a full pension and that leaves me wondering if he has a bad taste in his mouth after the Pizza-Gate fiasco…..Hmmmmmm
On the other hand, I wish him well and in his field of work, I have no doubt that he will find some part time work as a consultant to keep busy. I don’t see him often, but I will miss him