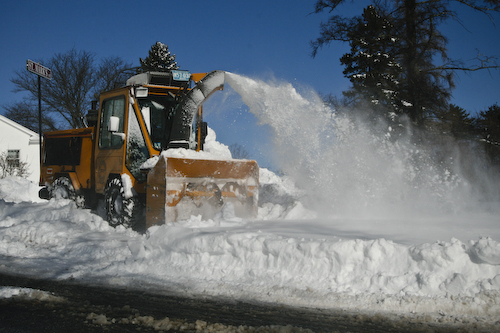 You shovel your front walk, you shovel out your driveway, and if you’re nice you shovel out a nearby fire hydrant, but are you responsible for shoveling the sidewalk in front of your home? A reader asked that question in a thread last week, and I in turn asked DPW Superintendent Karen Galligan.

Turns out the answer is no. Galligan said there is nothing in the town bylaw that requires residents to shovel sidewalks. The only thing the bylaw says is that you can’t dump snow on a public way or sidewalk, or in a way that blocks a fire hydrant.

The town owns one sidewalk snow blower (which at the moment is temporarily out of commission). Galligan said once a storm is over and the DPW crew has finished clearing the roads, they turn their attention to sidewalks. The town won’t pay overtime for sidewalks to be cleared, so the work has to be done during normal operating hours.

Galligan said they place priority on clearing sidewalks on the major thoroughfares like Main Street and Cordaville and Southville Roads. Sidewalks also get cleared on streets like Parkerville and Richards Roads that lead to schools. The town doesn’t clear sidewalks on smaller secondary roads and cul-de-sacs.

M.G.L. c 147, s 27B — No person other than an employee in the service of the commonwealth or any political subdivision thereof or in the service of an independent contractor acting for the commonwealth or any such subdivision shall pile, push or plow snow or ice on or against any fire hydrant or other similar device used for fire protection which is located in any public or private way so as to conceal such hydrant or device or cover any outlet thereof. Whoever violates this section shall be punished by a fine of not more than one hundred dollars.

Yes, there are sidewalks in the Pine Hill neighborhood. The town does not plow these.

But Al snow blows them. Thank you Al.

I found several articles that report a state Supreme Court ruling requiring owners to shovel… they are in real estate newsletters and one referred to a story in the Globe. Here’s one of them:
Property Owners Need To Clear Snow & Ice After Storms

,,,, Back when we were sunning in 80 degree weather, the Massachusetts Supreme Judicial Court overruled 125 years of snow removal law and announced a new rule of law that all Massachusetts property owners are legally responsible for the removal of snow and ice from their property. The old rule was that owners could leave natural accumulations of snow and ice intact and escape liability for slip and falls. No longer.

But most, if not all, sidewalks are not part of the adjoining owner’s property. Most of our sidewalks fall in the right-of-way which belongs to the town and it’s maintenance program.

It would be nice if the town plowed the sidewalks on Boston Road so that the elderly people at Colonial Gardens can get to church and down town. Even when they do finally plow the sidewalks, they do a lousy job. They do a crappy job on the streets so why should we expect the sidewalks to be plowed? How much money are they now going to want so they can “fix” the sidewalk plow? Here go our taxes again.

Wow livingthedream. A little bitter maybe? This town is far and away the best at clearing our raods and done in a way that is really exceptional. Who promised the sidewalks would be clear for the “elderly” anyway. My hats off to the Southboro DPW crews who are very professional in their snow plowing and treatment jobs. I hope the older guys (and gals – Karen) on the Public Works crews keep training the new guys and the new guys take pride in their work like the older guys have done for years . Thank you very much Southboto DPW and staff.

I’m lucky enough not to have a sidewalk. Maybe this weekend I’ll put in some effort at the corner knocking the top off the piles so those of us who are still so retro as to drive cars can see around the corner, a mix of public spirit and self-interest.

I would love to see more people learn how wide their vehicles are. Many times I’m feeling for the right edge with my tires while an on-coming driver is leaving a foot and a half on his right.

I don’t think you can call driving a car retro, because it’s almost impossible to like in metro west without one. However driving a car is a privilege not a right. Driving in Framingham Saturday night, I passed 4 people walking on Rte 9 (each was just walking alone towards the traffic – two of them were hard to spot in the evening light). I thought to myself that people shouldn’t need to risk their lives just to get where they need to be. I expected to hear something bad on the news that night, but I guess all the drivers out that night where smart enough to drive extra cautiously due to the snow banks being that high.

Below are two of the websites that speak of the property owners “legal responsibility,” including being liable if someone falls on a poor or unshoveled walk, it appears.
My question would be whether the town bylaw override the state law? Maybe it does but seems to me that the state Supreme Court (which mentions that legal reponsibility) would win that contest.Any lawyers who know the answer?
Here are two of the websites I found–there are more.
Massachusetts Property Owners Now Have Legal Responsibility To …
Jul 28, 2010 …
Impact To Massachusetts Property Owners: Shovel Early & Often … In most urban areas, sidewalks are legally owned by the cities. … 2010 at 10:05 am; Consider Yourself Forewarned: MA Law Requires Homeowners to Shovel …
http://www.massrealestatelawblog.com/2010/07/28/massachusetts-property-owners-now-have-leg… –
And from http://hubbub.wbur.org/2010/12/22/icy-sidewalks-reminder
If you don’t shovel your sidewalk after a snowfall and someone slips and gets hurt, you’re liable. Until today, property owners could argue the white stuff was “natural accumulation,” thanks to an 1883 ruling that made the hair-splitting distinction.
BUT I also see that one of the factors is who owns the sidewalk–the town or the property owner? Always something more to complicate things. In the meantime, maybe it’s better to keep shoveling!