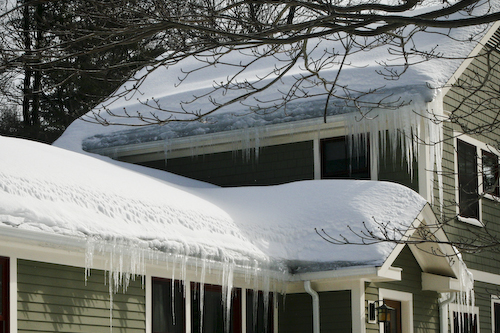 I laid awake for a while last night listening to every creak and groan my house made — and there were a lot of them — wondering if the roof was going to cave in at any second. Our house is still standing today, but with more snow and rain in the forecast for this weekend, I wonder just how worried I should be.

While most of the roof collapses we’ve all heard about on the news have been commercial buildings with big, flat roofs, local roofing companies say they’ve been inundated with calls from residents who are panicked about their roofs.

Fire Chief John Mauro Jr. said there have been no reported problems with roofs in Southborough aside from the ones at Trottier.

Framinghan Building Inspector Mike Foley said in a memo earlier this week that the amount of snow a residential roof can handle depends on a number of factors including not only the weight of the snow, but also the type of roof. “A flat roof, gable roof, shed roof gambrels, and roofs with multiple valleys and snow gathering points will vary the weight differential factors as will the number and type of roof coverings,” he wrote.

By code, residential roofs are built to withstand snow loads of between 25 and 50 pounds per horizontal square foot.

What’s important is not the depth of the snow on your roof, but how wet it is. Foley said the water content of snow can vary from 3 percent for very dry snow to 33 percent for wet snow, to nearly 100% for ice.

If you do decide it’s time to clear off your roof, Southborough Emergency Management Director of Operations Neal Aspesi says never do it alone, and take extreme safety precautions to prevent from falling. “The use of a professional is highly recommended,” he said.

So, how worried are you about the snow on your roof? What have you done about it? Have you tried to remove any of it, or are you just sitting back and hoping for the best? Share your thoughts in the comments.

Update 6:15pm: Fire Chief Mauro passed along this public safety advisory on potential roof collapse published by MEMA. Among other information, it gives some advice to homeowners on how to safely remove snow from your roof.

I would state it more as concerned, I’m keeping an eye on it. We’re fortunate to have a separate heating zone on our 2nd story, so I’ve been keeping the heat lower than normal. I’m more concerned w/ what the spring thaw will bring, I have a feeling we’ll see rampant flooding.

I hired a company to come clear my roof and ice damns last week and they have had to reschedule three times due to how long the jobs are taking them. I am now on the list for Monday… I would try to call another vender but they all seem to have a wait list. Can anyone recommend someone local that can do the job quickly?

There are a number of articles on the web on how to use calcium chloride (not rock salt!) to make channels in ice dams that will help drain water off your roof. You can google Calcium Chloride snow roof or Calcium Chloride Ice Dam.

Do your own DD but this seems like a better alternative than risking life and limb on a ladder or on the roof unless of course you want to see the new quint up close and personal.

Oh no! Please no flooding. We had a horrible flooding a few years back and it was a nightmare!

We had ours professionally cleared today. We were getting icicles on the side of the house and leaking into the window sills, and some through the mouldings into the house. I would encourage anyone with leaks due to ice dams to contact their insurance company. Channel 7 reported last night that most insurance companies will cover damage due to ice dams.

Hey Al, thanks for the link. I’ve heard about those devices before.

For homemade, instead of panty hose, per the article you link, I just put some calcium cloride in one of those tubular sheaths used to surround porous underground drainage pipe that I had on hand, and tied the ends. It lets a fine cc dust out a little at a time.

Also, you can leave a couple of extra feet of length above one of the knots to tack under the soffit and then flip the cc “ball” over the gutter on to the roof to make eventual retrieval/refill easier.

I’ve been keeping up with the main areas of concern on my roof, but am verry worried about the streets. Many drains are still covered and the streets have never been widened, so they’re now barely able to get 2 cars passed each other (and some not even that). People can’t see out past corners and driveways but instead of creeping out, they fly out…

A couple of thoughts:

If you are going to treat your roof with calcium chloride this winter, please realize that rainwater collection off that roof could be compromised in the spring. As it is, collecting rainwater off of an asphalt shingle roof is not recommended, but if the roof has also been treated with cc the rainwater will probably no longer be good for your landscaping. Even if you do not “collect” rainwater. The rainwater coming off your roof and into your landscaping may still be a problem. There may be other “enviro-friendly,” non-salt materials you could use in the same manner to treat your ice dams. It may be worth looking into.

In addition, cc can be harmful to the concrete around your home. Generally cc building up in the soil around you property is not a good thing. Here is a link I found on the implications of cc use and suggestions on other chemicals which might work better for your particular situation.

We have a steel standing seam roof which we installed about five years ago. The snow sheets off of it like a freight train! This has had negative consequences like some broken shrubs within the “fallout” area and one year a steel bench was left out instead of stored in the barn and, for want of a better word, was “taco-ed” by an avalanche of snow! We have to be careful walking under areas which still have snow build-up, which is a concern as my husband patrols around the house to clear our vents. But in the end we have no problems with ice dams and no anxiety about the weight of snow on the roof. Also we collect as much of our rainwater as we can in warm weather and are planning to increase our collection capacity. The steel roof is the optimum material for this process as it does not comtaminate the rain water. I have an extensive garden and this is a big plus for me, my garden and the environment. It is far better for rainwater to be reintroduced to the local aquifer instead of running off along roads and choking our storm water systems.

I used calcium chloride on my ice dams. I’ll bet that run off will not do my bushes any good. Is there anything I can or should do in the spring to mitigate the damage from the calcium chloride run off?

Unfortunately, that calcium chloride is going to go somewhere at this point so it is too late to prevent it from going into the storm water system or the water table. But there may be a way to protect your plantings.

Do you have gutters and downspouts? If so are they in good condition after all this bad weather? If the answer to both those questions is yes then protecting your plantings should not be too difficult. You can add extensions to the bottom of your downspouts to direct the runoff away from your plantings. It probably would not be a bad idea to gently power wash your roof in the spring to make sure any cc is rinsed off while you still have the extensions in place. If the gutters and downspouts are damaged, then some runoff is going to make its way to the ground around your shrubs, so repair them as soon as you can.

If you don’t have gutters, like me, it is going to be difficult to protect the shrubs. The best advice I can give is to cover the most precious plants with a sandwich board, A-frame type cover which will protect the foliage and the ground immediately under it, thus the largest part of the root structure of the plant. If your property is graded properly, to drain rainwater away from your foundation, this could prevent most of the cc from reaching the roots of your foundation plantings, but it will run into your lawn or other plantings on your property.

If you are really concerned, I would contact a good licensed landscape contractor who can give you some additional advice. Can anyone else offer some experience or advice for Mike?

Incidentally, the cc isn’t great for the foundatiion of your house either, since it can be corrosive to concrete (as per the article I posted the link for. So, anyone reading this – not just Mike, regardless of your affection for your shrubs, you should try to keep the run-off away from your foundations. Of course how much cc you used does matter a great deal as well.

Hope that all helps!

I would just add, that if using the sock, or “panty hose” method, removing them or any other cc application that you can in a safe manner, when it is no longer needed would help as well.

Will the CC damage aluminum siding? Particularly Aluminum siding that has been painted? Any feedback would be much appreciated.

CC is corrosive to aluminum, but from what I have read should not do major damage when the weather is cold or for a short time of exposure. I would suggest rinsing it off of your siding as soon as you can though.

Search on the internet for “will calcium chloride damage aluminum siding” and you should get a bunch more information.

Does anyone have those heating element thing-ies attached to the edges of their
bottom most roof shingles? I see them on houses every now and then. Does that help with ice damns or just with ice on the roof and not in the gutters? I’ve often wondered if it is worth having them put on.

I believe these are very effective. Ice dams form when water that is running down the roof from higher up hits the sofit (overhang) which is often colder than the rest of the roof. It freezes there and creates an ice dam. The water running down the roof then begins to pool behind the dam and seeps through the shingles. Shingles are designed to shed water down hill but are not waterproof.

The heating elements create channels through the ice dam that permit the water to drain. If laid in the gutter it can keep the water flowing through the gutter system. This is the same effect that the Calcium Chloride solution provides but is easier (and more expensive).

For those concerned about Calcium Chlorides effect on concrete, it is often used as an additive to speed curing of concrete (up to 2%) during cold weather and is considered less harmful than rock salt to concrete.