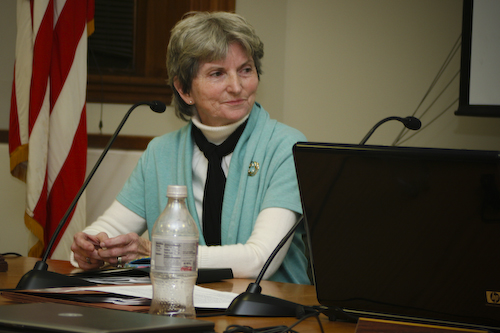 Above: Selectwoman Bonnie Phaneuf after announcing her resignation

After nine years on the Board of Selectmen, Bonnie Phaneuf announced last night that she will resign effective immediately. It’s an announcement not many of us saw coming, including the other two selectmen who shared the table with her.

Selectman Bill Boland said he was “caught of guard” by Phaneuf’s decision, and both he and Selectman John Rooney tried to convince Phaneuf to reconsider. “I wish you would reconsider and continue on the board at least through your term,” Boland said.

But Phaneuf, who was serving as chairperson of the board, said her decision to resign for “personal reasons” was final. She did not elaborate on what her reasons were. “I take no pleasure in leaving this board,” Phaneuf said.

Phaneuf leaves with three months remaining in her term.

Last month Phaneuf pulled nomination papers and announced she intended to run for reelection, but last night said she will no longer run. She thanked those who had pledged to support her reelection bid.

“It’s been a pleasure for almost five years to have sat at the table with you,” Boland said. “I firmly believe your heart is always with the town’s best interest.”

Rooney thanked Phaneuf for welcoming him to the board when he was elected last spring and for sharing her knowledge. “To say you’ll be missed is perhaps one of the biggest understatements I can make,” he said. “I appreciate all you’ve done for me and for the town.”

Phaneuf’s resignation leaves just two selectmen — Boland and Rooney — on the board. Two is the minimum required for a quorum. Boland said they’d discuss how to proceed at their meeting next week.

As of Monday, no residents other than Phaneuf had pulled nomination papers for a seat on the Board of Selectmen. In her resignation announcement last night, Phaneuf encouraged residents to step up and run for the position.

Phaneuf said she hopes to see multiple candidates vying for the spot. “More than one, more than two,” she said. “A public debate must take place in this town for the benefit of the community.”

Residents have until March 18 to pull papers (for more information, see here). Town elections are on May 9.

I first met Bonnie during the heated Algonquin/Southborough High School debates. We both supported the Regional High School. She helped me in my failed bid to become a selectmen. Later I supported her bid and she helped the late Charlie Millett in his.

For much of her tenure I supported her common sense, nuts and bolts, detailed approach to managing our government. Lately our visions of what is best for our communities have diverged. Regardless of whether one agrees with her or not she has been a shining example of all that is right about local government.

Over decades of service Bonnie has donated thousands of unseen hours to our community, attending department meetings, working with other government agencies, talking to citizens and more. We are all better off for her quite, unheralded efforts. Thank you Bonnie.

Thank you Bonnie for all that you have done for the town of Southborough over your many years of service. You have worn many hats and the many things that you have done are far to numerous to list. Often they are done out of the public eye. You do not look for accolades. Many members of your family have done the same.
You are always encouraging others to become involved in our town government, as they should. Please continue to do so.
As your intentions had been to continue to serve on the BoS. I am sure that your resignation comes with a mixed feelings.
As a resident and someone who has know you for many years, I wish you and your family, all the best, and again, thank you!!

Thank you Bonnie for all your service on many, many Boards over the years. You have given your heart and soul to this Town, and whether people agree with you or not they can not fault your dedication to Southboro by the thousands of hours you have volunteered.

I wish you and your family the best and again thank you from the bottom of my heart.

Bonnie has given enormously to this Town. I thank you, Bonnie, for all the endless hours of dedicated service.

I can give no better testament to Bonnie than to relate that, many years ago, I had a very good friend in town who ran against Bonnie for Selectman. I was the “campaign manager” of sorts. It was a very civilized campaign and Bonnie won big. The next time I attended a Selectmen’s meeting, I felt a little awkward when I saw Bonnie. She extended her hand, smiled at me and said “Thanks for being involved in the process. Stay involved!” (And I have!)

The whole Board of Health and our Public Health Director were at the Selectmen’s meeting last night to discuss our budget with Bonnie in charge. Bonnie has made the extra effort to attend some of our Board of Health meetings and she has addressed our budget and local health issues in a professional manner. We will miss her steady hand at the wheel. Thank you Bonnie for your years of service to Southborough.
Louis Fazen, MD, MPH

I’m that person that Betsy referred to, who ran against Bonnie 9 years ago. I left Southborough for CT a few years later, but have never forgotten what a kind, service-minded person she is. Immediately after the election, she and Charlie Millet encouraged me to take her seat on the Advisory Board, and I learned so much from both of them. I’m now in my 4th year of service on the Canton, CT Board of Education, and I credit Bonnie (and Charlie) with setting a shining example of public service. Bonnie, best wishes to you!

Dear Bonnie You have given so much time, effort and energy to a town that you love.. You will be missed greatly by everyone and especially families like us that have known you and Peter for many, many years…. Thank you and we wish you all the best
in the future… Don and Carol Hamelin