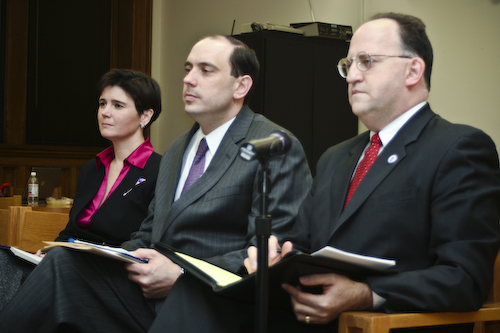 Southborough’s three state legislators attended last night’s Board of Selectmen meeting with an update from the State House. The message they delivered was something selectmen already knew: it’s going to be a tough budget year.

State Representative Carolyn Dykema, who represents Southborough precincts 2 and 3, warned the board to plan on at least a 5% cut in local aid. Calling it a “conservative” estimate, Dykema pointed to sagging revenue and lack of federal stimulus funds as reasons for the drop in state funding.

“We’re trying to balance the pain,” she said. “Hopefully this is the bottom.”

Selectmen John Rooney told the legislators that one of his top concerns is public employee benefit reform. “We have the same problem Wisconsin has. The town is broke, the state is broke,” Rooney said. “Change has got to happen somewhere, because we can’t keep going the way we’ve been going.”

“Health care is the number one issue here,” Selectman Bill Boland said. “When we get a 10 to 12 percent increase in premiums, we lose the ability to do anything else in our budget.”

Rooney and Boland also asked for the legislators’ help in addressing issues the town faces around PILOT (payment in lieu of taxes) contributions. In particular, Boland suggested that private residences owned by schools like St. Mark’s and Fay that are used for faculty housing should be taxable.

“They send children to our schools and don’t pay property taxes,” Rooney said. “It’s a huge issue in this town.”

Dykema said she wanted to work with the town on crafting language for legislation to address the PILOT issue.

i think that the major points which we all have been discussing (including an increase in regional school transportation funding!) were brought forth. i would love to be updated where we stand with the State as it progresses–especially with the circuit breaker monies as what a significant amount of money that is. With all that is going on in the world–really–let us try and work *together on this and look forward. No one will win if the town goes under.

It’s worth repeating Rooney. “Selectmen John Rooney told the legislators that one of his top concerns is public employee benefit reform. “We have the same problem Wisconsin has. The town is broke, the state is broke,” Rooney said. “Change has got to happen somewhere, because we can’t keep going the way we’ve been going.””

That means everything on the table. Teachers pay, unions, class sizes. The TOWN IS BROKE. To those who don’t believe I can only say please get real.