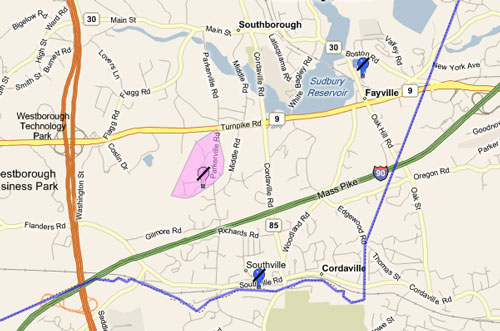 Above: Several areas in Southborough are without power (via National Grid)

National Grid reports more than 150 customers in Southborough are without power this morning — presumably due to the six inches of heavy, wet snow we received.

The largest outage is in the Parkerville Road area south of Route 9, where 123 customers lost power sometime around 7:30 am.  National Grid says they are still assessing the situation, and there is no estimate for when power will be restored.

Elsewhere in Southborough, 25 homes are reported to be without power on Central Street near Boston Road, and another eight have lost power in the Southville Road area near the MBTA station.

Southborough is not alone. There are widespread outages from today’s storm, most in the northeastern portion of the state. Those of you who have power, can monitor the situation on the National Grid Storm Center.

If you know of any other storm-related issues around town, post them in the comments.

Update 10:15 am: The outage on Parkerville Road appears to be resolved, and National Grid says power to the Central Street area should be restored around 10:30 am. The Metrowest Daily News reports a portion of Fruit Street in Hopkinton near the Southborough town line was closed around 9:15 am due to a low-hanging wire.

Update 1:00 pm: According to National Grid, all the outages in Southborough have been resolved.