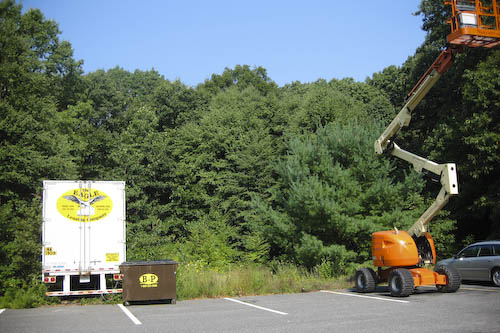 Above: This overgrown parcel of land by the South Union School will be the site of the town’s newest playground

Thanks to a decision by Town Meeting last night, Southborough kids will one day soon have a new place to play. In a close vote, residents approved spending $96K in Community Preservation Act funds to build a new playground at the South Union School, which houses the Recreation Department and Arts Center.

While commending the Recreation Department for their work, Selectman John Rooney said the board did not support the project because they felt it was “inconsistent” to recommend cuts in town budgets, and then turn around and support allocating funds to the playground.

Several residents said they agreed. “Do we want to invest in this right now?” asked Parmenter Road resident Karen Muggeridge.

Mark Murphy, chairman of the Recreation Commission, said the project was worth spending money on. “This is a good time to spend money if the project has merits,” he said. “If you wait it will cost more.”

Community Preservation Committee Chairman Andrew Mills said the decision by the Recreation Department to scale back the project, which originally included a splash pad along with the playground at a cost of $133K, showed “fiscal responsibility.”

Recreation Director Doreen Ferguson told selectmen last week that the playground could help her department bring in an additional $5-10K in revenue annually.

Former Selectwoman Bonnie Phaneuf said the town should have a long-term plan for its facilities before embarking on a project such as the playground.

“I think the town needs to take a serious look at its building assets,” she said. “We need to look at how best we can use buildings before adding anything else to them.”

The final vote was too close to call and required a standing count. In the end, 105 residents voted in favor of the project compared to 82 who opposed it.

Money for the project will come from the Community Presevation Act surcharge paid by taxpayers. The collected funds were matched by the state this year at a rate of about 28 percent.

The $96K approved by voters does not include clearing the land next to the South Union School – currently covered in brush and weeds – or installing the playground equipment. Ferguson said she plans to solicit help from volunteers to complete those tasks.

Funds will be available starting July 1, and Ferguson said she hopes to get underway on the project as soon as possible after that.

And how much in additional funds will this cost the taxpayers when there is nobody to clear the land and we have to pony up more to get that done? Then lets think about the upkeep. This is terribly misguided spending in the Recreation Director’s fantasy world that will end up costing us over and over again. What a shame.

There was an upkeep estimate in the proposal ($825 per year if I remember correctly), which indicated that the funds could come from Recreation. I assumed that meant from other fees, but it would be interesting to know whether my assumption was correct.

I was at the meeting last night and voted against this project for several reasons. Between the schools, Central Street, and the town house tot lot, we have lots of playgrounds to choose from.
Additionally, the South Union School is frequently discussed as a money-pit of a property that would be a prime candidate for the town to sell should we ever want to consolidate our facilities. Why are we investing $100,000 in a property that we’re not sure we even want to maintain in the long-term?!?
Thirdly, as a parent of school-aged kids I was pleased and a little surprised that the school budget passed so overwhelmingly on Monday. But it’s going to mean a significant increase to all our tax bills. To vote through a $100k playground on top of that strikes me as a little greedy.
As for Mark Murphy’s contention that the playground will cost us more if we wait to build it, that argument reminds me of the reaction I usually get from my husband when I tell him there’s a 25% off sale somewhere: The BEST way to save money, is NOT to SPEND it!

@Living the dream – I believe the Rec Director Doreen Ferguson said the upkeep was estimated to be $1500 a year and the Rec dept would cover it from their income. Therefore the upkeep won’t cost us anything. Also I believe the BOS, when asked, stated the clearing of the land was accounted for and would not be an additional cost, but I am not positive on that.

@DLD – Andrew Millis said that that the playground is fully moveable. Considering the rec dept is relying on volunteers to put it together I am guessing they would rely on volunteers to relocate it if necessary.

The Tot Lot is for toddlers and not fun for preschool and older kids. The school playgrounds are not accessible during most of the year and are not for younger kids. Happily the Central Street playground is great for both younger and older kids. So that means we have one playground in our town that is readily accessible for all ages. So I don’t think a second playground on the other side of town is unreasonable. I’m sure others disagree with me, but that’s my two cents.

0
Tessa
Reply to  mom of two

Mom of Two-
I agree with you. Im glad that the children on the south side of town can finally have a communal place to play.

My family and I live on Southville Road and I love the idea of a playground within walking distance. We have a lot of small children in the area that will benefit greatly from a central place to play. I have a large F350 pickup and will volunteer all the time and resources I have to help clear the land.

As a Southville Rd resident, and soon-to-be mother of 5 kids under the age of 8, the playground at the Rec Center will change my life, for the better. As was stated earlier, Finn is not available M-F, 8am-6pm (school and then extended day) for 10 mos of the year, which is extremely limiting. The Tot Lot behind the town house is simply too small for more than a couple kids, and not at all fun for the over 4 set. Central St is nearly a 15 min drive, and combined with its challenging stroller access, lack of bathrooms, and the difficulty of unloading kids on that busy road, I always opt to go to Hopkinton’s EMC park. All that said, I am happy to hear that the playground equipment is movable, should the town choose to sell the Rec building. It is also not something I would have supported if the town had not already had the money in the CPA fund to pay for it. Though I am expecting twins at the moment, and therefore will be unable to help with much of the land-clearing/installation work, you can bet I will be drumming up other volunteers to help, and I will be on the sidelines cheering all the way.

Essentially, we’re paying for it in taxes, and paying again in fees to use it.

The playground will serve many purposes 1) additional play area for all Southborough and even more so for the South side 2) increases visibility/awareness for Arts & Recreation 3) enhances programming thereby adding to the revenue line. Recreation does not charge residents for playground usage and does not intend to in the future. We do, however, charge non-residents if they wish to host a party at a playground (Fay Memorial).
The program revenue that Recreation generates is mainly from resident participation but also from non-residents (Ashland, Hopkinton, Westboro, Marlboro, Framingham). It covers the recreation’s tax based budget and also goes back into recreation programs and the Town.
A few examples of how revenues are given back to the town:
*The outdoor basketball court at Woodward, materials to repaint the court and new hoops and pole pads
*The sheds located at Woodward, Trottier, and Finn
*Purchased new flagfootball equipment for Neary School
*Trottier long jump sand
*Replaced two rocking units at Fay Memorial playground
*Pays for Constant Contact so we are able to advertise not just for ourselves but any organization in Southborough (Scouts, all youth sports, schools, local non-profits)
I could go on but won’t.
In addition, the Friends of Recreation also give alot back to the Town. They purchased the skate rink which many people have enjoyed the last two winters. They run holiday events for our young children on Valentines Day and St. Patricks Day. In 2010 they gave $2,000 in scholarships (for residents only) to participate in Recreation programs. They made large donations to Southborough Summer Nights Fireworks last year and plan to again this year.
I encourage people to find out more about how the recreation budget works. Our door is always open and I would be happy to sit and talk or answer any questions via phone or email.